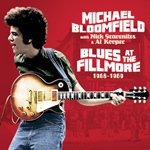 For those who weren't there at the time, some small explanation may be necesary. In the late Sixties it seemed obligatory that every student dive or flat would have a copy of an album featuring guitarist Mike Bloomfield and/or keyboard player Al Kooper.

They had impeccable pedigree: Bloomfield a gifted slide player who had been in the Paul Butterfield Blues Band, had played with early electric Dylan and was on Highway 61 Revisited; Kooper formed Blood Sweat and Tears but quit early, also played live with Dylan and was on Like a Rolling Stone.

Their separate and entwined family trees inevitably lead to them working together.

They appeared on the rather flabby Grape Jam bonus album which came with Moby Grape's Wow and that lead to their Super Sessions album. That in turn lead to the student flat favourite, the double Live Adventures of Mike Bloomfeld and Al Kooper recorded over successive nights at the Fillmore in '68. Guests included singer/guitarist Elvin Bishop and Carlos Santana who stepped in when Bloomfield was hospitalised with exhaustion.

What they delivered were extended blues-based jams and the songs they chose -- on Live Adventures material by Simon and Garfunkel, Ray Charles, the Band, Booker T and various bues artists -- were just the vehicles. It was music to immerse yourself in, usually a bit stoned, maaan.

They were great players.

This disc is interesting in that it draws from various sources: the first five tracks are Bloomfield with singer-guitarist Nick Gravenites (the soulful singer from the Butterfield band, and Electric Flag which he co-founded with Bloomfield), then there are tracks of Bloomfield with Kooper (none from Live Adventures but more rare sources, one featuring Johnny Winter then just making a name for himself).

This is blues-rock of the old kind, in places an object lesson in how to sustain a jam , and perhaps mostly of interest to old fans.

But for the casual or curious, there is an exceptional horn section on the Gravenites tracks (Taj Mahal drops by to sing on Johnny Otis' If I Ever Get Lucky) and Bloomfield's playing can be incendiary or blues-moody as required.

Later Mike Bloomfield became one of his generation's drug casualties, dying in '81 at 37, and when news filtered out you can bet battered copies of Live Adventures were hauled out all over again.

Yes I was there,saw the Stones at the Civic circa 1965,saw them but could not hear them,you all know why.So when I was checking out Lewis Eadys record dept in Queen Street around 1967 and saw an LP called The Paul Butterfield Blues Band I looked closer and noticed the cover featured 3 white Guys with short hair and two black guys(Howling Wolfs rythmn section),all wearing square clothing and i thought how unblues.At that stage my exposure to the blues was English bands such as The Stones ,Mayal,Cream,Fleetwood Mac, etc,all white guys wearing way out clothing with hair down to their waists.Anyway for some reason I took a chance and bought it and so began my adventures with Mike Bloomfield!.Blues at the Filmore is a great Cd.The sound is incredible given it was 1968/1969,the playing is amazing,Mike is on fire.Nick the Greek is backing up really well and the concert with Al Cooper is great and check out the track with Johnny Winter,Ihad forgotten how hot he is /was so some Winter goes on tonite as I butcher the BBQ(to many chards).Also if you havent already chase down all the Live Adventures.Michael and Nick at Fillmore west 1969,Electric Flag and all the Michael solo stuff.It will be a great adventure