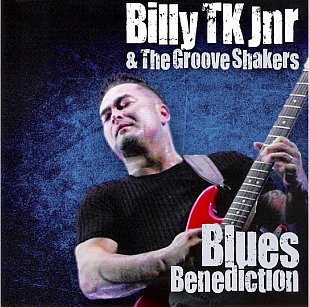 You might think being the guitarist son of Billy TK -- whose name is usually preceded by the phrase "the legendary Maori guitarist" -- might be a serious hindrance to a career under your own name, but Billy TK Jnr long ago lit out on his own directions.

While his dad drew favourable comparisons with Hendrix back in the late Sixties/early Seventies (in Human Instinct, later Ticket and his own band Powerhouse) for his kiss-the-sky playing (and still does), Jnr aimed his sights on tough Texas-style blues for which he seemed to have a natural affinity.

He spent time in the longhorn state, worked the bars and clubs, has played the length of New Zealand and in Australia but . . .

Oddly enough he would sometimes disappear for a couple of years at a time into some other career.

Then, just as quickly as he had vanished, he would reappear full of enthusiasm for his new project. It was no surprise therefore that an album a couple of years back was titled Presenting Billy TK Jnr. He sort of has to reintroduce himself, even now.

With typical enthusiasm he claims this album -- recorded in fast hard sessions after many months of recordings were lost -- to be his best yet . . . and while he might not be the best judge of that, in this instance he is right.

He leavens the furious openers Flyin' Kiwi Shuffle and Which Way is Up? (both originals designed to tear the roof off any bar) with a New Orleans' styled shuffle Bubba Rhumba which lets the unnamed pianist in the band take you down to the mardi gras. (I hope the album comes with full credits to the band, mine doesn't and they aren't named on his website).

And after a rip through Freddie King's Hideaway he dials things down for a fine treatment of Robert Cray's Phonebooth before delivering an exceptional exploration of Jimi Hendrix's Little Wing.

This is a piece whch can be a trap for so many guitarists who want to pull out all the stops or follow too faithfully in the footsteps of the master. But TK Jnr explores it for over eight minutes and never lets the core of the melody slip from him while gently pushing it into areas of delightful, subtle improvisation which is both tasteful yet exciting.

It is an absolute standout on an album that is brim full of exceptional playing by TK and his band.

When he is in full flight or getting his head down he has been likened to Stevie Ray Vaughan (an influence acknowledged in the reflective closer Stevie's Good Night Blues) or George Thorogood (who has been mightily impressed).

But these are just reference points and Billy TK Jnr -- despite that shadow of his famous father and other comparisons -- has always been his own man. Never more so than here.

And when you listen to the confidence with which he undertakes Little Wing -- not so much in awe of Hendrix that he can't place his own stamp on it -- you have to concede that this album is a career high point, very high, from someone long deserving recognition.

Like the sound of the blues, then start exploring here.