On Laochuan Mountain just 20 minutes drive from the motorcycle-clogged and fume-filled streets of Taipei is a remarkable series of open-sided wooden buildings. Part meditation retreat, part cultural centre and part performance space, this is home base for the country's acclaimed U-Theatre.

It houses around 20 members who live communally and have daily exercises in gymnastics and percussion. It is highly disciplined and not for those with just a casual interest in being part of the company's ensemble.

“Every morning people do martial arts or tai-chi,” says founder-director Liu Ruo-Yu, “and after that they do meditation. In the afternoon we start the drumming classes. We don't have houses exactly, just like a wood tent. There are no windows or walls because that is more natural.

“But it can get very cold during the winter and we need to have a fire so we can work, but most of the time it is fine. When the city is hot it can be chilly, but when it rains on the mountain it rains inside too.”

U-Theatre – which came to the Auckland Arts Festival for performances of their 75-minute piece Sound of the Ocean, see review below – was founded by Liu and her husband Huang Chih-Chun in 1984 shortly after she returned from New York where she had majored in an MA of Theatre Arts and was part of a one-year workshop lead by the innovative Polish theatre director Jerzy Grotowski.

Liu was a stage actress but her husband Huang – born in a Chinese-Malay family in Malaysia and who had learned drumming and martial art since age 11 – was the prime mover behind the ethos and disciple of the U-Theatre.

“He came to Taiwan to study and after graduating from the athletic school he joined a dance theatre and I was studying drama. I invited him to join me in a theatre but he wanted to go to India for a trip. While there he met a master who taught him a kind of meditation, a way to let people understand who they are, and to understand 'the moment'.

“He stayed for six months and every day watched himself in 'the moment', when he was walking, eating, drinking and even sleeping. So he always had this sense of watching himself and concentrating.”

On his return to Taiwan Liu notice the change in him and they decided all members of the nascent U-Theatre company should engage in meditation to focus on their inner selves as much as doing theatre exercises.

The company built its first retreat by themselves – it has since been expanded – and “people said we are somehow living the way the monks live”.

“Basically U-Theatre performances combine martial arts and drumming. But the people need to do this meditation, and we also run around the mountain for physical training because the mountain gives us very different from a studio.”

At their centre they offer classes for other drummers and percussion players, and exercises “to help them quieten their mind, and movement classes to help people understand their inner selves”.

U-Theatre has both men and women performers and Liu notes “the Japanese don't have women drummers in their tradition, but I have seen some old pictures [of objects] from the [Chinese] Ching Dynasty [17th to 20th century] and there are figures which look like women in their shape.”

The piece they are bringing to Auckland took four years to create and was first performed at a festival in Avignon in 1998. Since then it been performed around the world. It is a piece with a sonic narrative which has grown organically in a manner which parallels its broad and inclusive theme.

“At that time I was pregnant and my husband was on the mountain with the members and this was the first time he was going to be a father. Something in his mind was thinking that this was an unknown life coming, so there was no traditional melody coming out from him.

“So he just made one sound on the drum like a 'tock'. Then two sounds 'tock-tock' and then as it grew it felt like a river, just like the sound of the rain which goes into a river. And from this came the river to the ocean and the sound became bigger with more drumming, and louder.

“This was the first piece he made for Sound of the Ocean.”

Liu says another movement extended into the sound of water hitting rocks with the drummers responding physically by jumping in the air and that took the piece into a more physical arena. Another section considers the deepest and quietest place of the ocean where Liu says you may still hear “a sound like 'Om' which is always in the Universe”.

“This is the original sound and that's why we use a lot of gongs which make a sound like 'Om'. That section is the Sound of the Ocean, but actually in Chinese it is 'the sound of the heart'.

“And in the last piece we use a gong which is like the tide and the ocean, and another like a temple gong. This to share with people the idea there was a bodhisattva who gets enlightened by the sound of the tide coming and going.

“When the sound goes we think there is nothing but actually we can still hear that sound, so he gets enlightened by that. That last piece is called Sound of the Tides.”

Liu says wherever they have taken the performance people bring their own cultural experience and memory to it: in Germany a gentleman afterwards told them it brought up images of German churches and buildings; in Israel an old woman said she felt her body was drumming along “as we were all in the same universe”.

John Cage's piece 4'33” – where not a note is played – reminded us that in the absence of music there is still sound, and the appreciative audience at the Aotea Centre last night got the message again when -- during the five minutes it took for 13 U-Theatre percussionists to silently take their places behind their instruments with a slow, fluid grace -- the hall resounded to coughs and wheezes. The random nature of these may have amused a Zen-attuned spirit, but there was nothing random about the disciplined, often mathematical and vigorously muscular 90 minute performance which followed. U-Theatre are, for want of a better description, athletic ascetics whose endlessly morphing, integrated and almost martially tense pieces demand rigorous attention to timing and dynamics and touch many different emotions.

Following the commanding opening piece and a sublime, calming solo on guqin (zither) by Liao Chiou-Yen, a smaller ensemble evoked the pitter-patter of raindrops leading to a torrent.

The most hypnotic piece however was a lengthy mid-section section on deeply resonating gongs – which suggested dark oceanic depths – where a millisecond in difference between the strikes by the five musicians brought out subtly different tones. Combined with soft throat singing and smaller chiming gongs, this meditative and moving piece was powerfully poignant, especially when coupled with the thunderously surging section which followed. Taken together they evoked of the ocean's power at a time when many people's thoughts might drift to how that has affected one of Taiwan's near neighbours in recent days.

Although first performed over a decade ago, Sound of the Ocean has a timelessness and also travels well – small sections were reminiscent of Polynesian percussion, others like From Scratch without the whimsy.

Delivered with expressionless intensity and monastic concentration, this is an undeniably powerful work which you might feel glad to see at this time – and not in a few months when coughers, wheezer and sneezers are out in abundance. 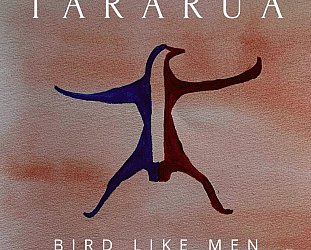