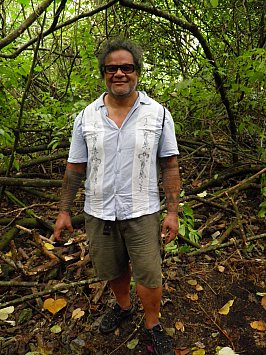 John Pule pushes aside another tangle of thick branches, steps through the ankle-grabbing undergrowth, scans the ground which is strewn with coconuts then peers closely into the green canopy above.

We're in thick and humid bush but he pushes on across the slippery limestone, further and further away from the narrow track which has lead him here. After more fruitless searching he laughs, “Anyway, it was around here I was born”.

The old house – behind the village of Liku on Niue's eastern coastline – is long gone. The foundations are here somewhere but no one lived in the house after his parents moved to New Zealand, as generations of Niueans have done, in 1964.

Pule, born in 1962, is back in Niue for the first time since 99. As the island nation's most famous artist and writer – who calls himself as “a poet” to the amusement of his longtime dealer John Gow of Auckland's Gow-Langsford Gallery, also accompanying him – he has today come to look for his birthplace which stood beside his grandparents' house, also gone.

Earlier he'd told how his father and his cousins made a pathway of lavalavas and cloth to the house and his dad and his new bride walked across them.

“And she planted a red hibiscus out the front,” one of the landmarks he's been looking for. 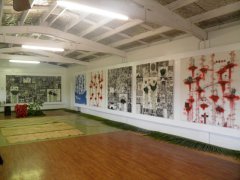 Pule has returned in Niue and eight of his large canvases are being exhibited in the modest but perfectly suitable Makini Hall in the capital Alofi. Pule's work and presence has been an ambitious idea mooted by the convener of the island's third biannual Arts and Cultural Festival, Dr Colin Tukuitonga.

The exhibition (“$400,000 worth of paintings on the walls” says Gow, and that doesn't include insurance or the cost of transport) is the centre-piece of the week-long festival.

Among the most relieved the pictures are finally up – aside from Gow, extremely relaxed given what might have gone wrong – is Pule's friend Fred Renata who has taken care of the technical requirements then installed the works. 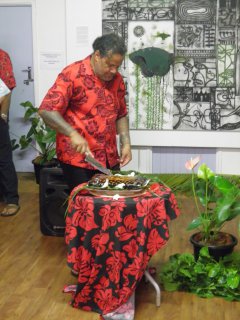 Opening night – attended by the premier the Hon. Toke Talagi and other dignitaries as well as extended family and friends – coincidentally happens to be Pule's 51st birthday for which there is cake and a celebratory atmosphere.

In his introductory speech Gow tells how he first met Pule in the early 80s through the artist Mark Cross (also in attendance and who divides his time between Liku, his wife's village, and New Zealand) and then in the early 90s went to a Pule exhibition.

He says as someone who sees a lot of paintings it is rare to be stopped in his tracks, but Pule's work did that to him.

“It was a unique vision, a confident hand and they were beautifully painted. So although I had no money at the time I felt I had to buy one which I did, and it still hangs in pride of place in my house in Auckland.”

Gow speaks of their long friendship, “a career which has taken John all over the world, and John has taken Niue all over the world” and also refers to something art researcher Michael Graham-Stewart from London, also on the trip, observed about the hall: “He said, 'It's almost like the work knows it has come home'.” 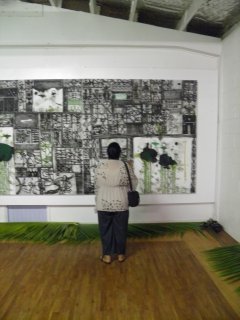 To loud applause he introduces “my friend, our artist, your son John Pule . . .”

Although he has never previously spoken at any opening, a visibly nervous Pule steps up – and speaking initially in Niuean – greets his guests, pays tribute to his origins and Liku, then tells of how the family left and settle in Otara, that he was expelled from school at 14, was lucky when his father's sister Auntie Mocca took him in, and how through her and his mother he was able to start putting together a personal and cultural history.

He explains how he came across of book of hiapo (Niuean bark cloth paintings) which documented the uneasy relationship between the first explorers and people of Niue and how this art form – largely lost or unknown to Niuean people today – immediately informed his art as a mode for expression. He says the pattern of imagery on hiapo was like looking at a bookshelf of ideas, and it opened him up as an artist.

He says he'll be in the hall every day until noon if anyone wants to discuss the paintings (later he notes artists usually mount a work then become invisible, but here it was important he be seen and available) and concludes by saying “everything I have written over the years, and what I have painted, is very much influenced by the place where I was born”.

It is a moving and modest speech, an he is immediately surrounded by well-wishers.

Vanessa Marsh, Niue's Tourism Development Coordinator and the quietly efficient contact on the ground, admits there were many challenges getting this extraordinary exhibition installed – not the least finding a suitable space on the small island -- but it was important the exhibition happen, especially for artists on the island, some of whose impressive work is also part of the festival.

“It shows local people how important it is to have faith and confidence in your own ability.”

Pule agrees, his career shows “it's a possible thing”: “It's a beautiful life but it's very hard, a difficult road. All artists know it's great to do these things but it's another thing to live off your art and have some form of security.

“That comes about from, 'Do people, do my people, want me? Are they interested in what I'm talking about? Am I using the right language to describe a situation, a community situation, on a national or international level?'

“If people are interested in your stories they are prepared to buy it because it's an extension of a history they can also expand on and talk about.”

The day after the opening Pule, as reluctant an interviewee as he is a public speaker, says he's been pleased by response from his people.

“They have basically never seen anything like it up here. They had a glimpse of my CV and they could see I have been exhibiting all around the world and in Polynesia, but have never bought a solo exhibition back to Niue. So there was a gap in my CV, but I managed to put it in there when they printed the brochure. It needed to be recorded.

“This is very important to me, absolutely. It's long overdue. It's good to be appreciated and acknowledged, especially by your own people.”

The exhibition – the first solo exhibition on Niue by an internationally acclaimed artist -- has been for Pule a homecoming on many levels.

In the catalogue for this singular exhibition Pule's friend and artistic biographer Nicholas Thomas, director of the Cambridge University Museum of Archeology and Anthropology, writes, “He has painted the oceans and heavens but returned often to the gardens of Liku and the landscape of Niue”.

The morning after his fruitless search for the red hibiscus and the foundations of the family home, the poet John Pule returns to Liku by himself for another look.

A few hours later he's back in Alofi with a very big smile: “I found it, I found what I was looking for”.