Musical innovations can happen by accident or out of necessity: a stoned John Lennon allegedly spooling the tape of Rain into his player the wrong way and discovering the sound of backwards guitars (he wanted the whole song released in reverse, but settled for just the coda).

Or Brian Eno who was mostly confined to bed after an accident stumbling upon a concept of ambient music when he put an album of 18th century harp music on the turntable, lay down, and found the volume too low and one speaker not working . . . which meant the music simply became part of his sonic environment.

And out of necessity the German electronic outfit NEU! -- an offshoot of Kraftwerk and part of the amorphous Krautrock school of the early Seventies alongside Can and Faust -- finding they had no budget to complete their second album so remixed and manipulated (by changing the tape speeds) an earlier piece to fill out the running time.

NEU!2 (1973) wasn’t the first remix or tape manipulation, but certainly that album was enormously influential -- as had been their debut NEU! the previous year, and the subsequent NEU! ’75 would be.

Three albums which sold next to nothing at the time, and yet are cited by everyone from Johnny Rotten and Joy Division to Eno, David Bowie and Radiohead’s Thom Yorke as crucial in their listening?

Seemingly so: when Ultravox first got together they adopted the NEU! exclamation mark at the end of their band name by way of a tribute, and the band Negativland took their name from a (very Joy Division-sounding) track on NEU!’s debut album. NEU! were so cool that Sonic Youth on the Ciccone Youth album acknowledged them in a song title.

NEU! even had a signature sound which has been given its own name: “motorik” which describes their (motor-musik) repetitive rhythm which is as distinctive, if a little more gently melodic, as Kraftwerk’s autobahn beat.

But today this apparently influential band are a footnote in rock history books, their career marginalised and their influence subservient to that of Kraftwerk, Can and their other Krautrock peers. Their albums were also long out of print or available in poor bootlegs taken from vinyl pressings. 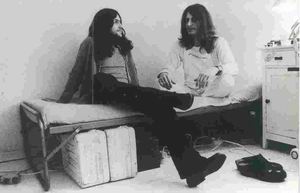 NEU! formed in Dusseldorf the early Seventies when drummer Klaus Dimmer and guitarist/keyboard player Michael Rother quit the flexible line-up that was Kraftwerk at the time. They hooked up with producer Connie Plank.

If the NEU! debut album sounds less than remarkable today it is simply because so many of its unusual qualities have become part of mainstream music through its influence.

The metronomic and lightly space-psychedelic jam sound of the 10 minute opener Hallo Gallo --- years before Kraftwerk’s minimal and repetitive Autobahn -- calls to mind Joy Division (with backward guitars) with a whiff of early Pink Floyd; Sonderangebot is a sonic wash of sounds in the studio of effects fading in and out with no obvious musical structure but evokes a space flight; and Im Gluck is a slow, Indian-influenced drone upon which others, one in particular, would build careers.

Brian Eno -- then still on platform shoes and wearing feather boas in Roxy Music -- was paying careful attention: it would be a few years before he hooked with NEU!/Krautrock producer Plank in his studio to follow the atmospheric, melodically simple but shifting sound of NEU! for his album Another Green World.

But by the time Eno and Bowie got together for Bowie’s Low, both had been converts to NEU!, especially the NEU! ‘75 album with its split personality of two very different sides, one ambient and the other more rockist.

Bowie wanted Low to be similarly divided, the first side his more familiar style, the second the drum-less and lyric-less instrumentals.

And later when Eno was in New York working with David Byrne, Bill Laswell, various members of Pere Ubu and others, the German band was in his consciousness.

“When we started,” says Laswell, “they [Eno and Byrne] would always say, ‘Oh no, this is too syncopated. We want to do a very European record.’ They were looking for NEU! or Can.”

Much of what is on the NEU! debut album sounds like a weird offshoot of prog-rock improv (Hawkwind were fans) or something that had slipped sideways out of a strange version of 2001:A Space Odyssey. Familiar for sure, but no less compelling for that.

NEU!2 is problematic today (the tape manipulations seem naïve and somewhat pointless, although better material is elsewhere) but NEU! ‘75 has some gorgeous ambient tracks on its first side, notably the seven minute Seeland which could have come from Eno’s Apollo album almost a decade later and the haunting but incompressible spoken vocals on the slow piano piece Leb Wohl.

Its profound influence on the Eno/Bowie so-called “Berlin trilogy” of Low/Heroes/Lodger is apparent.

The second side (one track called Hero, make of that what you will) is the pointer to Johnny Rotten in the Pistols and PIL where Dinger snarls across their archetypal sound in a manner that Rotten was much influenced by. It is quite a disconcerting experience to think that what seemed so original when Rotten did it actually had a recent precedent.

In most rock books NEU! are but a footnote, if that.

Yet their discreet influence was significant and these three albums -- they split up, Rother did sessions with Eno and Cluster, they attempted a reformation to little effect -- are fascinating listening.

NEU! were prescient, different, erratic and in their own way an important influence on many musicians who used their ideas to greater effect.

Styles and careers were born out these three NEU! albums.

I used to really love the Wilco album, A Ghost is Born, with its long repetitive instrumental passages, but I never understood that album until I heard NEU! and Hall Gallo in particular. (I still love it BTW)