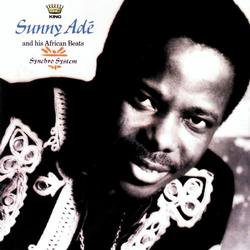 Given the long (and often shameful) history Britain has had with various parts of Africa from colonial times, it comes as a surprise that this album -- from 1983 no less -- was the first pop album to be recorded by an African musician in London.

In the early Eighties there was surge of interest by the UK music press in certain African artists, notably Fela Anikulapo Kuti from Nigeria whose lifestyle, courageous intake of marijuana, forceful personality, assertive self-determination politics and driving Afrobeat meant he commanded feature articles.

He'd been doing it for years back home before being signed to Island and releasing the excellent Juju Music the previous year which captured hearts, attention and even some wallets. Island seemed keen to put Ade on the same level as Bob Marley, and in some ways that might have been possible.

But Ade was very much a man out on his own. Back home he was known as "the Minister of Enjoyment" and his shows would spin out for up to three hours of juju guitars and rolling percussion.

Reviewing it Richard Cook observed, "Melody, a currency deflated to an impoverished wallet of recycled tricks by Western pop, grows and breathes in Ade's music. It evolves out of rhythm as it was meant to, instead of being grafted clumsily to an artificial thrash."

Benefiting from fine production by Martin Meissonnier who separated out the individual elements in this complex music (and added a little keyboard), Synchro System was the album that should have made Ade a household name.

That it didn't -- and that after one more album Island let him go -- seems a real shame. But in a way any non-English album is going to be a hard sell. And Synchro System didn't spring singles or grab attention, it just wasn't like that.

As Mark Brennan wrote in a review at the time:, "Synchro is an album of profound pleasures rather than quick thrills. The songs are rarely strong in melody and always similar in mood, but its quality lies elsewhere: it's a wall of (voodoo) sound that cuts across cultures and cuts one to the core, that speaks of universal truths and humanitarian codes".

It was also accesible, put a smile on your face and made you tap you feet or do a slow shuffle dance of your own invention.

Ade's soft voice is just another instrument and the backing vocalists don't come on the whole attention-getting Ladysmith or like Fela's horn sections. They too drift in and around the weaving guitars and the terrific grooves set up by bass and percussion.

The music was joyful and quietly exhilarating, and remains so even today.

"I don't deal with politics at all," Ade said in a full page profile in NME at the time. "The only thing I preach so hard in my music now is love. And then peace. There is peace in the world, [it's] only that people don't allow it to move or to be expanded."

In that King Sunny Ade may be right, or he may b worng.

What is beyond question however is that Synchro System is an album which conjures up the finer feelings -- and is an essential, and Essential Elsewhere, album.