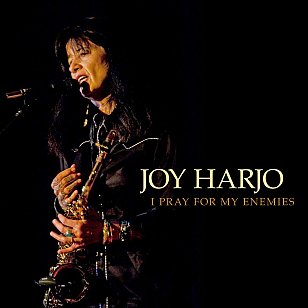 We are forgiven for not knowing much if anything about Joy Harjo who is the current Poet Laureate in the US and the first Native American to hold that title.

Harjo (Muscogee Creek Nation) has won more accolades than we could count and at almost 70 has built a huge body of written work and half a dozen albums where she reads her powerful work with various traditional and contemporary musical settings.

For this remarkable album (which could appeal to those of the Patti Smith/Allen Ginsberg persuasion but who also know of the late Native American poet John Trudell, the late saxophonist Jim Pepper and the great Buffy Sainte-Marie) she has assistance from REM's Peter Buck, Pearl Jam's Mike McReady and Black Crowes' Rich Robertson (guitarists), oud player Rahim Alhaj, her husband Owen Sapula on traditional drums and others.

Her own saxophone and flute playing are a chief feature of the song-poems which can have a slippery and engaging jazz context as much as low-level rock or hauntingly throbbing noir.

Her source material is of her poems old and more recent which touch of the power of nature, the contemporary issues facing Native Americans dislocated from their culture and land, cultural memory and living in a nation divided.

How Love Blows Through the Trees – with mournful trumpet and sax – links the ancient (her grandfather's stories and songs passed down) with the need for love in the time of Covid. And both Fear and Running go beyond easy description, but demand to be heard.

With traditional chants and songs sprinkled through, this is contemporary poetry bound up up with song, music and history . . . and which doesn't shy from hard truths about colonisation and oppression while passing the messages of the past, love, forgiveness, spirituality and preparedness to a new generation.