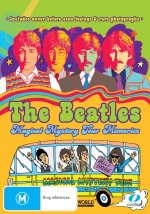 Introduced by Victor Spinetti -- the only man other than the Beatles to appear in three of their films, A Hard Day's Night, Help! and Magical Mystery Tour? -- this rather stilted but nonetheless mildy amusing doco is knobbled by the obvious: it doesn't include any of the original Beatles film; none of their music (aside from covers of relevant songs); and, aside from fleeting hand-held footage or snatches of interviews, the Beatles are largely only seen in stills.

In a sense the Beatles are incidental to their own story here, and that's slightly interesting because the people interviewed were kids, teenage fans or those on the Beatles bus at the time when the Beatles -- at McCartney's prompting after the death of their manager Brian Epstein -- hopped on this colourful bus and drove around for a few days shooting hours of footage to be made into a film entitled Magical Mystery Tour. Perhaps McCartney aside -- although he would not be entirely clean -- the other Beatles were frequently out of it on marijuana.

As one middle-aged man notes,  Harrison and Lennon were always disappearing off and coming back very happy. They all look it in the footage taken on Super 8; the Beatles play wiith kids, go for walks (followed by a large crowd), are laughing and joking, and try to learn dance steps for the grand finale.

The film was widly panned on release in Christmas '67 -- the excuse being that the BBC initially screened it in black'n'white, but it was pretty shapeless -- and time hasn't been kind to it as it has been to Help!

But what is interesting here is just how much access local people had to the Beatles at the height of their popularity (Sgt Pepper's had only just been released a few months previous): the foursome went into local shops, weren't harrassed but treated with respectful worship even by enthusiastic teenagers, and would just roll up to pubs and hotels and have a pint or doss down where they could.

There is a lovely story about McCartney going into the local boozer and announcing "the pub pianist is here" and sitting down at the old johanna and pounding out songs like I Do Love To Be Beside the Seaside with a pint on top of the piano.

So this short (75 minutes), stilted (Spinetti doing his best to be enthusiastic) and rather forced doco is one for fans and completists. Among those adding their presence and recollections are McCartney's brother Mike, Neil Innes (then of the Bonzo Dog Doo Dah Band, later a Rutle), fan club secretary Freda Kelly, the Beatles press officer Tony Barrow and their tour manager Tony Bramwell.

A slight doco about a slight film -- but Innes and the crew singing I'm the Urban Spaceman right at the end is kinda funny.