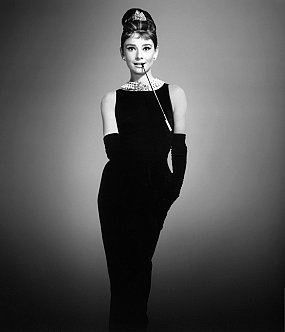 The description "unauthorised" usually implies content that the subject may not wish to have exposed to the public, but there is nothing in this documentary -- hagiography in fact -- which Hepburn might have disapproved of.

She is here described in terms of a secular saint for her charity work, and with adjectives which suggests she hovered close to the angelic in terms of beauty, screen presence and style. And indeed her final film appearance -- unmentioned here -- was as an angel in Steven Spielberg's Always ('89)

Some of this is true of course and her unceasing work with children as a UNICEF ambassador would have taken an emotional toll on anyone, yet just weeks before her painful death from cancer in '93 she was still going to the camps of starving children and drawing attention to the suffering in Somalia.

But Hepburn's life both on and off the screen which loved her so much hardly needs the layers of praise added on thickly here in the voice-over. 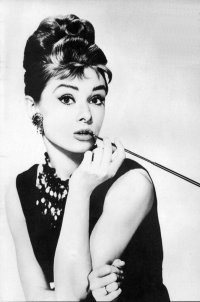 Relying on trailers for films, short snippets, documentary footage (some of it bearing little relation to the time or subject) and a catalogue of exquisite still photos of Hepburn, this 75 minute film offers an airbrushed overview of her remarkable life which took her from war-ravaged Amsterdam (where she suffered malnutrition and saw family members shot by the Nazis) to the catwalks of New York and finally onto the screen.

She had bit parts in a few British films (the Lavender Hill Mob among them) but her first major feature was the wonderful Roman Holiday (with Gregory Peck) which even today sparkles with wit, glamour and dry humour. It won her an Academy Award and she was on her way as a demure, elegant woman with huge eyes, thick eyebrows and a winning smile.

Her waif-thin figure was usually draped in Givenchy and she created the notion of the little black dress -- and the slightly longer black dress. She had films which were less successful, but others (notably Charade) still stand up today. This doco skates past her less successful films (it fails to mention quite a number) and aspects of her private life (and that she was a chainsmoker) but throws the spotlight on her seminal films such as Breakfast at Tiffany's (that dress!) and My Fair Lady.

For the latter she was controversially chosen over Julie Andrews (leading man Rex Harrison who had worked with Andrews in the stage production was initially reluctant about Hepburn, but was charmed) although her singing voice was judged by Andre Previn as "unacceptable". Marni Nixon sang her part -- although this doco (hagiography, right?) would have you believe Hepburn was cruelly robbed of the opportunity of showcasing her wonderful voice.

My Fair Lady looks quaint and stagey to contemporary audiences, and Hepburn is unconvincing as a street cockney. But when she blossoms into a lady -- which Hepburn was by inclination -- she is much more successful in the role.

But her life was full of roles: wife (wronged wife too); mother (miscarriages then happiness); model; actess; the face and look for Givenchy . . . and then that remarkable charity work where she used the fame she had won for the good of those much less fortunate.

In that work she was tireless and if her film career fades in importance as taste change then nothing caan take thaat away from her. That was her legacy.

That, and just being exceptionally photogenic, especially in black and white.

That film is a collaborative art is accepted, but it can also be a war of attrition where inflated egos collide at the interface of culture and commerce. And in Hollywood where the stakes -- money,... > Read more