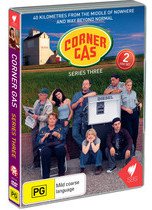 Does Canada make the most consistently interesting but largely unseen television programmes?

Possibly: any country which can give the world The Beachcombers (filmed in quaint Gibsons and sold to 50 countries in the Seventies) and also the very droll Corner Gas (sold to considerably fewer) gets my vote as a nation which has found its points of difference: they seem to be truth in representation and a very dry, understated sense of humour.

The comedy series Corner Gas -- as mentioned previously at Elsewhere here -- should appeal to New Zealanders because it has that same non-event/small-things-are-big premiss as Flight of the Conchords: characters are dumb/smart, incidents are inconsequential but important, and every line means something. Miss a phrase and when it comes back later on it won't bite you as intended. (But in a nice way.)

The town of Dog River -- remote, a few buildings against an enormous sky and flat landscpe -- is a character in itself, in fact it might even be the driving character.

By season three Corner Gas was pulling in a number of nationally famous Canadians -- from sports stars to politicians -- but none of them meant much (or anything) to people outside Canada. Yet their cameos are brief and funny, even if you don't (and you won't) know who they are. (You can guess.)

But once again the small ensemble based around a gas station, the adjacent cafe, a local pub and the police station find a social dynamic to amuse and entertain . . . and you may well find yourself saying "Spakernius, he invented space" or "the bum of the mind" and puzzling your friends.

But inside you will be laughing like a train.

Corner Gas, regrettably, remains a private joke among those who have found the time to watch it. And that would be millions in Canada -- and a select few in the outside world. This a show where they use words like "quandary".

The episode Telescope Trouble (see below, and follow the You Tube links to the whole episode) is a classic: when Wanda gets a large telescope it is the pivot for a running gag; "Hey, cool bazooka" says Hank. "Awesome, a big tube" says Davis the cop.

And you also get, "Step away from the hinge"?

"Hey Lacy, you wanna go to a meteor shower?"
"Do I have to buy a present?"

PS: The Canadians also made Little Mosque on the Prairie. Think the US could do that? Says it all.