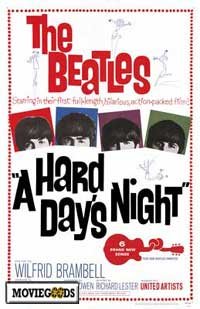 There's a brief scene in A Hard Day's Night that went right past most people at the time. Watch carefully in the first few minutes and you'll catch it.

John Lennon is sitting in a railway carriage and holding a bottle of Coke. With a knowing look he sniffs, or more correctly, snorts it. It's the little things in life really, isn't it?

Viewed from this distance, that Beatles film of 1964 is a period piece -- the days of knowing innocence when Beatlemania was still fun and not a prison for the four young men at the centre.

But it's from that less manufactured world of pop that the film gains its energy.

It captures a period, but also transcends it by virtue of its pace (it's a day in the life of the Beatles, sort of), its superb direction by Richard Lester (who says it made his career) and, of course, the three-minute pop songs which carry it.

It's also hilarious, shows a vibrant world of Britpop supplanting the bowler hat brigade (the funny sequence with the gentleman in the rain at the start), and employed great character actors and in-jokes.

The refrain "He's very clean" about McCartney's grandfather, played by Wilfrid Brambell, makes sense today only if you know he was old man Steptoe, the crusty junk collector in the television series of the period.

But there are also shapes of things to come: the terrific sequence of a dry George Harrison quietly taking apart a cynical adman who wants to launch a new Swinging London model the kids will fall in love with ("She's a slag," says Harrison. "We turn the sound down and say rude things abut her."); the justifiably famous scene of a lonely, already jaded Ringo hanging out with a kid (he was very hungover, hence the look); McCartney's Famous Eyebrows in just about every shadow-soaked performance, and so on.

A Hard Day's Night was the best, and arguably, the only film the Beatles were ever engaged in.

For Help! in 1965 they became a caricature of themselves in a James Bond-like romp, and Magical Mystery Tour was a rambling and plotless mistake. For Yellow Submarine they begged off entirely and were replaced by cartoon characters.

Let It Be, a documentary of the band quietly self-destructing, is one for those who want the reality and not the dream.

A Hard Day's Night is the dream, in a sense. But it's also a snapshot of pop at its most fun, the band already starting to get weary of the circus they created, and comes with excellent, very British cameos.

In retrospect, it's a wonder Americans got it at all. And no one got the coke joke.

Oh, and the opening chord and title sequence to A Hard Day's Night is worth the price of admission alone. 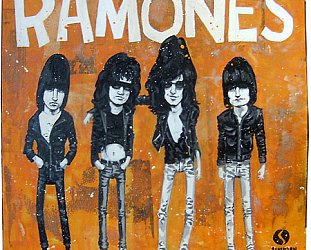 The best thing about being in a band? You get to stay up late and make a lot of noise, maybe make some money and become famous. If you want people to notice your group it's a good tip to all dress... > Read more