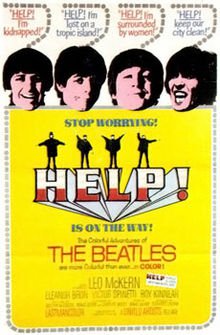 The Beatles' career was rife with strange coincidences and symmetries, and that's excluding the fact they played in Auckland on my 13th birthday.

More pertinent in the greater scheme of things was that their debut single Love Me Do was released on the same day -- October 5, 1962 -- as Sean Connery introduced film audiences to James Bond in the film Dr. No.

And the Beatles' second album With the Beatles was released in Britain the same day as Dr Who first screened, and across the Atlantic the young president John F Kennedy was assassinated in Dallas.

Of all these unusual coincidences it is the Bond one which is relevant in any discussion of the Beatles second film Help!, released in Britain in late July 1965.

Shot in colour, it was very much in line with what audiences had come to love about Bond films. At that time Connery had been through Dr No, From Russia With Love and Goldfinger (with Thunderball due in cinemas just before that Christmas) and all of them had involved exotic locations.

This was the time when Britons discovered something called tourism and just how close "the Continent" was. Mass tourism took off with cheaper airfares and, prompted no doubt by Bond's globetrotting, Britons turned away from kitchen-sink dramas like The Loneliness of a Long Distance Runner and A Kind of Loving, the dourness of Billy Liar and the cinema verite style of A Taste of Honey. 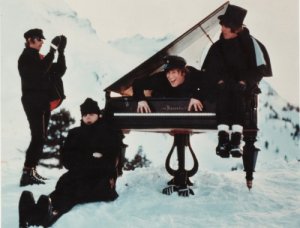 They wanted something much more exciting in this new age of Beatlemania, Carnaby Street, Swinging London and Op Art, Pop Art and flashy cars.

And for the Beatles making their second film, they mostly just wanted a holiday, so a script appeared -- written in late '64 when their first film A Hard Day's Night was still making waves -- which took them to the Alps and the Caribbean and, yes, the windswept Salisbury Plain.

At the time Help! was largely written off as inferior to A Hard Day's Night (it was and remains so) but it is also rather better than it appeared at the time, even if you take the Beatles and their music out of the mix.

It's more like a Bond film, or a parody of one: enticing locations, a seductively beautiful woman of uncertain loyalties (Eleanor Bron), assassins out to get our hero(s), a pompous British scientist, incompetent police and security people . . . but all with a distinctively twist of wit by director Richard Lester (brought back after the runaway success, both critical and popular, of A Hard Day's Night). 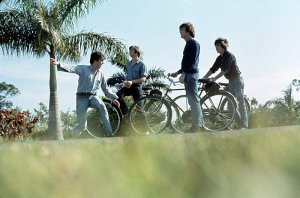 We chose to do, said Lester in 2007, "a Pop Art fantasy with which we could play around with the state of Britain in 1965 and [prime miniter] Harold Wilson's white-hot, modern society.

"Just pre Haight-Ashbury, pre-Vietnam, petrol wars and the 1968 May riots there was still a bed in England an exuberant residue of good humour.

"We had The Pill and, as yet, relatively few parking meters.

"If the film seems innocent, we can all plead guilty -- the songs were great and filming them was sheer pleasure."

Martin Scorsese, a big fan of Lester's work, spoke highly of the "tamped down" colour and deadpan humour throughout. With every frame, wrote Scorsese, the Beatles and Lester seemed to be saying, "Here's the second movie, with a plot about an Indian death cult lead by Leo McKern and Eleanor Bron and some interludes on the ski slopes and the beach thrown in for good measure -- now it's time for you to do your part: watch and enjoy".

Scorsese said because you were in on the joke that made the film even funnier.

Regrettably however, the screenplay by Marc Behm (who wrote "the story") and Charles Wood has none of the frissons which made A Hard Day's Night so distinctive: the Liverpudlian street slang so prevalent in the earlier film is played down (although arguably phrases like "come 'ead" meaning "come on" had been played up in A Hard Day's Night) and there are no scenes as poignant as Ringo's encounter with the kids on the riverbank or as dry and satirical as Harrison's scenes in which he puts down British fashion and pop slaves.

And are the songs as good?

Perhaps not, although in Lennon's You've Got to Hide Your Love Away we hear the clear influence of Bob Dylan and his title tune would take on greater meaning in years to come when people listened beyond its typically upbeat rhythm.

The soundtrack -- which consisted of just one side of songs from the film and some throwaways and filler on side two -- however sprung McCartney's Yesterday.

And of course, as we would learn on the subsequent album Rubber Soul with the Lennon song Norwegian Wood (again Dylanesque), the scene in the Indian restaurant where there are some musicians playing was the first time Harrison would hear and see a sitar, which became a lifelong fascination for him.

No Help! no raga-rock? Without a doubt.

Help! may be an episodic film of  disparate incidents punctuated by songs, and for that it really could never match the excitement of the deliberately quasi-doco A Hard Day's Night.

If in the first film they played a version of themselves, for Help! they became almost caricatures -- just as Bond was of British spies.

For Magical Mystery Tour they dropped any pretence of being actors or even themselves.

And by Yellow Submarine they had become fully fledged cartoon characters.

It took Let It Be -- still unavailable on DVD -- for the world to see something like the real Beatles, outside of news footage, again.

And the place of Help! in their filmography?

For more on A Hard Day's Night go here, for more on Magical Mystery Tour go here and for more on Yellow Submarine try this.