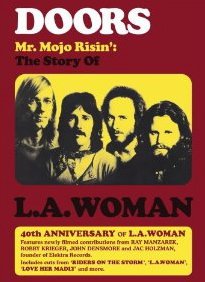 Door singer frontman Jim Morrison might not have always been the great poet he imagined himself, but he certainly knew his way around a self-mythologising acronym. Hence "Mr Mojo Risin'", the name he came up for himself around the time of what would be the Doors final flourish in the studio, LA Woman of 1971.

The remaining Doors -- guitarist Robby Krieger, keyboard player Ray Manzarek and drummer John Densmore (the latter interviewed here about LA Woman and Morrison) -- are also pretty aware of keeping the Jim/Doors Myth alive. This doco ties in with a 40th anniversary presentation of LA Woman, but in '97 there was also a "40th anniverary" reissue of their albums (LA Woman among them).

And this is the second year in a row we've had a bio-doco of the band. Last year it was When You're Strange.

Certainly the protagonists repeat themselves as their story has become worn smooth -- or, if you prefer, honed to perfection -- down the decades, but for those either new to the band or who have forgotten just what a return to form LA Woman was, this 100 minute overview covers all the bases and is very convincing.

All the former members are interviewed here -- although given the tetchiness between them it's not surprising Densmore concentrates on Jim and the general picture while Manzarek is quick to speak of Kieger's genius. But here too are engineer Bruce Botnick --who sits at a mixing desk and isolates tracks to allow us to hear drum, guitar and organ parts separately -- as well as the Doors previous producer Paul S Rothchild who quit the sessions and left the recording over to the band and Botnick.

And also on hand are poet Michael McLure who contextualises Morrison's poetry and the group's music within the post '68, Vietnam/civil rights/post-Kent State era; Elektra label boss Jac Holzman, former manager Bill Siddons (whose unhappy task it was to fly to Paris after Morrison had died there) and Rolling Stone writer David Fricke.

Interestingly, British rock writers have never really "got" the Doors and McLure explaining the music and Morisson's poetic persona in the context of America of the day makes a lot of sense.

"They provided the soundtrack to the counter-culture," he says, "and a cultural consciousness that was in the process of growing and that they were a part of."

They were also musically more complex than most bands of their time.

As this doco shows, they drew on Oedipal references, located themselves in the context of Aldous Huxley and William Blake, had two feet in the blues and jazz, felt the pull of Raymond Chandler and film noir (Riders on the Storm) and weren't averse to pop music. Hello I Love You could have been covered by the Monkees.

Manzarek says he thought of them as "the Modern Jazz Quartet of rock'n'roll" and both he and drummer Densmore were big jazz fans. They had the idea of bringing in horns and strings for earlier songs like Touch Me (which sounds very close to Blood Sweat and Tears).

But, as the film shows, LA Woman also allowed Manzarek to quote a little Chopin (in Hyacinth House) and their classic Riders on the Storm is deconstucted back to its origins in the old country music classic Ghost Riders in the Sky.

On the same album the title track includes a line which might have come from southern blues -- "been down so long it looks like up to me" -- and The WASP (Texas Radio and the Big Beat) is the closest Morrison ever got to persuasive Beat poetics.

The bonus features here include extended interviews with the protagonists and throughout there is much previously unseen footage. In places studio versions are dubbed onto live footage (which is increasingly standard practice in such docos) and the main players all speak highly of LA Woman. 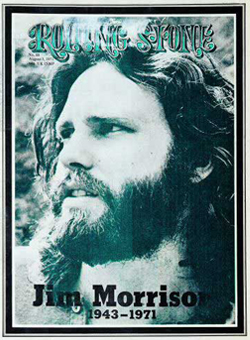 Densmore says it was the essence of what they were as a band, Krieger recalls the sessions "almost like a jam, that was probably the most fun album to make" and Manzarek -- never short of upping the stakes -- says they decided to "make the album in a Zen moment in time".

Well, hindsight is a great thing.

But writer Fricke, who has the liner notes in the reissued album, says for this album  "they found a unity that was exactly what they needed to show people that they still had what everybody originally loved them for".

Within a couple of months however Morrison was dead at age 27.

Fricke notes if a band was "going to have an epitaph, that was the one to make".