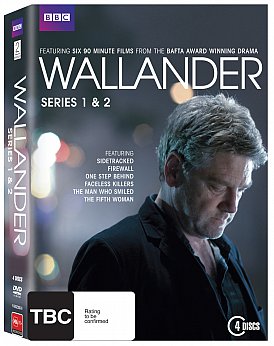 Since two of my sons moved to Stockholm a couple of years ago I have taken a greater interest in a country I only know for gifting the world smorgasbord, Abba, Roxette and their unique take on alt.country-folk with bands like Baskery and First Aid Kit.

So what have I come across in my increasing curiosity?

Well, not long after they moved there some Al Queda lunatic tried to blow up something just around the corner, then I started watching movies from this land of cheery Ingmar Bergman . . . The Girl with the Dragon Tattoo, The Girl Who Played with Fire, The Girl Who Kicked the Hornet's Nest . . .

And now the Wallander series of 90 minute features for television, adapted from the novels of Hanning Mankell.

Despite the lovely scenery in and around the small town of Ystad in Skane, south of Stockholm where these stories are set, it too is a dark and murderous place where detective Kurt Wallander (played by a worndown, pasty and weary Kenneth Branagh) seems to be up against an unnaturally high number of serial killers, racists, mad bastards and seamy subcultures in a place with a population fewer than 20,000.

But it is that strange juxtaposition between open spaces, great natural beauty, and skies which look icy clear and fresh with the threatening undercurrents of violence which give Wallander its frisson of uncertainty.

And, perhaps because this is a small world, the crime is often uncomfortably close to home. In One Step Behind, the third in this series, one of Wallander's detectives is murdered (laying open the question of how much do we really know about our colleagues) and Wallander's daughter is accidentally instrumental in him being drawn into a web of murdering internet hackers.

Pleasingly, Wallander doesn't have some character tick (he's not ADHD, alcoholic or a gambler etc) but on the periphery of his life is an ex-wife with a new partner ("A golfer, why does everybody find that funny? I don't."), an increasingly estranged father with progressive dementia and an adult daughter who worries about her dad ("We all just have to be a bit adult about this") and his poor diet.

And Branagh as Wallander looks like a man who works too much, eats badly, should sleep more and perhaps even exercise. When he faints and is diagnosed with diabetes you do think, "Well, we saw that coming".

What you don't see coming -- aside from the first episode when the outcome seem oddly telegraphed -- are the twists of plot, how bad things can happen to good people in pretty places, and the toll this can take on ordinary people. There is also a longer story arc which runs through the series and adds other layers to the self-contained episodes.

The other persuasive feature of Wallander is -- even though it is a BBC production -- nearly all of the actors other than Branagh are unfamiliar. You believe in them immediately and although their backgrounds aren't revealed they seem rounded enough simply by doing their jobs.

Far too many American and British crime novels are peppered with quirky characters (do we want to see another permanently eating, wisecracking coroner or the overweight geek at a computer?) and Wallander is mercifully free of such stereotypes.

People just go about their business, get worn down by work and the long hours of daylight around mid summer's day, don't say what they feel when they should, worry about the mundane things we all do and live in nice Ikea-furnished apartments with graffiti-free hallways or go to handsome country estates.

Some of them also die in the most gruesome circumstances however.

After watching and enjoying these six episodes of the Bafta award-winning Wallander, I'm increasingly worried about my kids in the picturesque and clean land of Abba and smorgasbord.