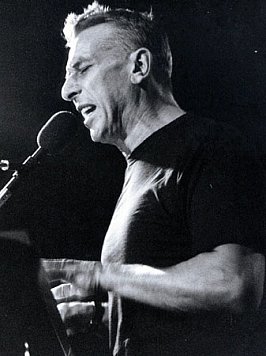 As with anyone who was there, I have a vivid memory of John Cale's show at the Gluepot back in September '83, and in fact I still have the poster ("Tickets sold! Limited door sales. Be early!")

Cale's Sabotage/Live from '79 can't be topped for the sheer intensity he brings to material like the thrilling seven minute version of Mercenaries (play at full volume and then put on Pere Ubu's Thirty Seconds Over Tokyo, two back-to-back tracks that will have you either air-punching or cowering behind the couch).

For sheer passion and intelligence Cale can't be topped, which is why he has had a much more interesting solo career than his fellow traveller from the Velvet Underground, the self-important Lou Reed.

There are dozens of Cale albums around but anyone wanting a one-stop shop wishing to find out what the fuss is all about should check out the Rhino double disc set (with booklet) Seducing Down the Door which covers the two decades from 1970 and brings you up to the Andy Warhol tribute album Songs For Drella which he did with Lou.

It covers rock'n'roll (Fear is a Man's Best Friend, Dirty Ass Rock'n'Roll), those chilling covers (Heartbreak Hotel, Walkin' The Dog), his classic songs (Pablo Picasso, The Soul of Carmen Miranda) and much more.

And the eerie, mysterious and beautiful Chinese Envoy (inspired by a Guy de Maupassant short story), a song I remember clearly from that Gluepot gig.

I remember reading a review of that glupot gig years later in a magazine on a very late night in Auckland while waiting for my chips - "Gluepot memories" or soemthing like that. I think it was 1996. Anyway, the line I remember was "never miss an opportunity to see John Cale live". I'm glad I took that advice 11 years later in a small theatre in Dublin. Amazing. It helped that I was spitting distance (him, not me). He played pretty much the setlist from Fragments Of A Rainy Season, which I think is the best intro to Cale. And for once, meeting your hero wasn't a let down.

I had the pleasure of seeing Cale at the ICA in London do a fairly experimental set with himself on piano, a DJ doing whatever DJs do and (at the end) a female singer doing a song-cycle based upon (I think) the letters from SOE operatives during the war. back in about 2000 I think. He messed with the melodies but did a few of the classics, they were a bit hard to recognise (Hallelujah sticks in the mind). Not much audience interaction, but at least Cale smiled on occaision which is more than I saw Lou Reed do at the Albert Hall about the same time (I exagerate, Lou smiled right at the end as he took his bow)

Thank you so; what a delight! So, so long ago, I thought I'd neeever wanna listen to any Velvets yet again, but .. I .. just could not let go of John. Grateful, too, as much of the intricacy and experience that brings him out, in the wee bits that fall off when he's not looking. Never did, I think, but -- you do. Have. And - as always, pass them back along, to savor. Muchos gracias, amigo abroad! -- pb