Even during their lifespan there were always records which were attributed to the Beatles. The suggestion was that they might put out a single anonymously just to see if it would chart -- or there were the famous bootlegs of "the Beatles with Bob Dylan".

After they broke up in 1970 there were any number of rumours that they had reformed under an assumed name. The most famous was Klaatu in 1976 whose self-titled album appeared on the former Beatles US label Capitol.

Klaatu might have disappeared if it hadn't been for a Rhode Island DJ playing an album track and people phoning in to ask if it was the Beatles. As with the "Paul is dead" rumour, things took off from there and people scoured the album cover and songs for clues.

The album sold 300,000 copies in eight weeks, doubtless spurred on when an Australian DJ said this was the missing Beatles album entitled Sun, and if you played the track Sub Rosa Subway (a parody of the McCartney album Red Rose Speedway?) backwards and at different speeds and tweaked the sound through filters this message could be heard: "It's us, the Beeeeeatles".

Mysteriously no names were credited on the album and Capitol said they'd never actually met the band, the tapes were brought in by their manager Frank Davies, who refused to deny it was the Beatles. As he would.

Klaatu -- whose identitles were later reveaaled -- went on to release five albums, and that mysterious debut sprung the minor hit Calling Occupants of Interplanatery Craft for the Carpenters.

But years before Klaatu another band briefly enjoyed this "is it them?" story.

The Flame's See the Light b/w Get Your Mind Made Up had people wondering aloud: it certainly sounded like the Beatles from their Daytripper period and the vocals were a little McCartney-like. Then there was that ending which suggested Hello Goodbye . . .

Again in the absence of much information people speculated.

Listened to today it is clearly not the Beatles, but that didn't matter when rumour fuelled the discussion.

Ironically Flame (who enjoyed no subsequent career) had an interesting story in themselves: they were from South Africa (where they were The Flames) and their drummer was voted the best in the country. They moved to London in '68, were picked up by Beach Boy Carl Wilson who produced their See the Light single and sole album . . . and they broke up.

Two of them -- that drummer and the singer -- joined the Beach Boys' touring band.

The singer was Blondie Chaplin who has for many years been one the Rolling Stones' backing singers . . . and the drummer?

Well, he was Ricky Fataar who has become a well-known session musician, has worked in the production or co-production end with Crowded House, Jenny Morris and others, is in Bonnie Raitt's touring band and -- here is the amusing irony -- was Stig O'Hara (George Harrison) in The Rutles film and on the soundtrack played guitar, sitar, drums and sang.

So not quite a Beatle, but definitely just one step removed. 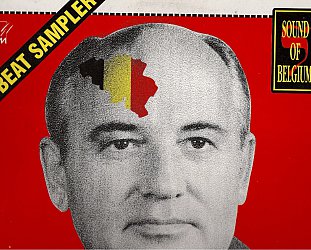