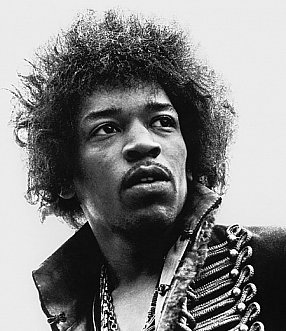 It's well known that Jimi Hendrix didn't have much business sense, but he sure knew how to play guitar. This track -- one of about 60 recorded with the little known singer/guitarist Curtis Knight at a small studio in New York -- is a measure of both.

Hendrix -- at that time Jimmy James -- had recently been fired from Little Richard's touring band and had done a few gigs with Ike and Tina Turner, but was stuck in New York with no gigs, few prospects and just wanting to play. He'd recently pawned a guitar to pay his rent.

At Ed Chalpin's tiny Studio 76 on the corner of 51st and Broadway they found him a guitar and with Knight and his band the Squires they started recording. Chalpin knew a good thing when he heard it and in October '65 signed Hendrix to a three year contract "to produce and play and/or sing exclusively" for his company. Hendrix would get paid minimum scale rate and have no control over any recordings he might make. He was given $1 "and other good and valuable consideration" although it isn't clear quite what that means.

No matter, Hendrix just plugged in and played away for a couple of days, little knowing that within 18 months he would be massive and signed to yet another contract.

Out of the Knight/Chalpin sessions came some of the most shonky bootlegs of Hendrix's career -- around 100 albums on which some parts are spliced into other songs, versions are truncated or artifically extended and, in this case, Knight's voice dubbed in later as he tried to mimic Hendrix's vocal style.

Hendrix later admitted he was very stoned at the time and the guitar was out of tune.

But the single appeared in '67 after Hendrix had hit it big with Hey Joe, Purple Haze, Wind Cries Mary and his Are You Experienced album. A Knight/Hendrix album entitled Get That Feeling (from which this version is lifted) appeared on Capitol at the same time as Axis: Bold As Love -- and of course Chalpin turned up waving his contract and started to sue everyone in sight. He still had Jimi under contract until October the following year.

Weirdly, Hendrix agreed to do some more recording for Chalpin although he cleary said on the studio tape "you can't use my name". Uh-hu.

There was subsequently litigaton and counter-litigation -- and albums from the Knight/Hendrix sessions kept appearing in increasingly unusual and awful versions.

It was all messy, but here is Jimmy James, stoned and on an out of tune guitar, in a small studio in New York 18 months before he became Jimi Hendrix.

And even then, he sure knew how to play guitar.

Most of the ideas found on the Experience albums already exist in these Curtis Knight sessions; they are like demos for the work ahead. This is the demo for "burning of the midnight lamp".