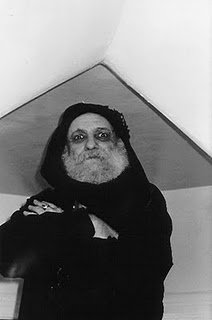 The late poet/filmmaker and documentarian Ira Cohen (who died in April 2011 age 76), was one of those rare voices from that co-joining of the Beat Generation of the Fifties and the Sixties counter-culture.

He lived for many years in North Africa and India where he sampled the earthly and esoteric delights, and raised his consciousness through spiritual ceremonies and mind altering substances.

In the Sixties his famous Mylar Room (lined with distorted mirrors) became a place where the famous and famously out-of-it would hang out and have their photos taken, and his '68 film The Invasion of Thunderbolt Pagoda (with a soundtrack by himself and drummer Angus Maclise of the early Velvet Underground) is considered one of the most seriously trippy films ever made (see clip).

Enter at your enjoyable peril, it is available on DVD. In '94 he released the album The Majoon Traveler (his debut!) on which he read some of his poems, some recorded in Marrakesh in '87, others as far back as '64 and one with Paul Bowles and Brion Gysin from '61 ("during this recording Farato the fire-eater drank a kettle of boiling water").

These pieces were edited by Cheb J Sabbah, some had music from Don Cherry, MacLise and others woven into the backdrop and on this piece there is a sample from Ornette Coleman's album Dancing in Your Head which featured the Master Musicians of Joujouka (aka Jajouka). It celebrates Coleman's acceptance by his hometown of Fort Worth where the short-lived Caravan of Dreams performance space was located and which Coleman opened.

I mention my visit to that place here.

Cohen was a free spirit in every good sense of that phrase and one of that generation who saw in hashish and psychedelic drugs a true, intellectual path to cosmic consciousness. His work across any number of disciplines is a journey of discovery, maybe this piece and the film will start you on a long strange and rewarding trip?

For reasons which were never clear or explained, in 1989 the Rolling Stones included this interesting piece of rock exotica on their Steel Wheels album, which was otherwise business as usual in the... > Read more