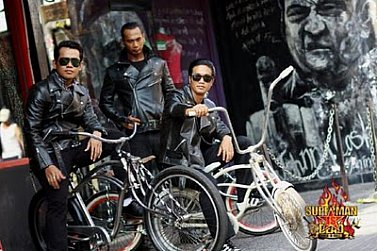 Those who head to Bali for some r'n'r and an escape from stress (as I did, see here) will probably come back with the memory of quiet ambient gamelan music which drifted from speakers in the restaurant or by the pool.

There is however a whole lot of other music in Bali, not the least of it coming from this long-running post-punk trio whose rock credentials probably aren't elevated by them posing on bicycles.

No matter, Superman is Dead deliver an excitable punk-cum-ska sound and their album Kuta Rock City has as a slogan on the back "Punk rock is about being 18 and saying No".

Tracks on this fiery album include Punk Hari Ini, Graveyard Blues Vodkabilly, Burn for You, Runaway Stripper, Ephedrin King, F***ing Hero and My Girlfriend is Pregnant.

Just thought you'd like to know there is more to Indonesian music than calming gamelan.

I bought this in Ubud and when I came home it really got stuck in my stereo.

No, literally, stuck in my stereo.

I had to take the damn thing apart to get it dislodged.

They may not be good, but they are stubborn.