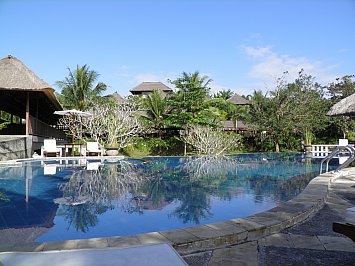 Being a travel writer – as I have sometimes grandly described myself – means never being able to say you're on holiday. Every destination – even the most mundane or local – may hold an experience, a story, or a character you feel compelled to explore and perhaps convey in print.

And so I have gone out of my way to see a bizarre museum dedicated to Elvis Presley in smalltown Mississippi, followed my instincts to a tiny island off the coast of the bickering Koreas where the sole attractions were pumpkin candy and dried seaweed, and travelled up a river in Sarawak to spend the night with people who had shrunken skulls hanging on the wall of their longhouse.

But at my insistence and with encouragement from my wife – who has supported my explorations and frequently accompanied me as I follow a whim – we took A Holiday. There was what people of “a certain age” call A Significant Birthday to acknowledge – from here on they become increasingly significant, I think – so we went to Bali.

We avoided the fleshpots of Kuta and my wife found the comfortable, quiet Santi Mandala Villa and Spa in a pleasant valley just 20 minutes from Ubud. For a week I did a whole lot of nothing.

We spent hours by the pool drifting in and out of consciousness to the sound of ambient gamelan-styled music, watched colourful kites in the clear blue sky, sometimes went into Ubud to poke around the market and eat, and had a holiday just like other people do.

And then I fell off the wagon. I couldn't help myself. 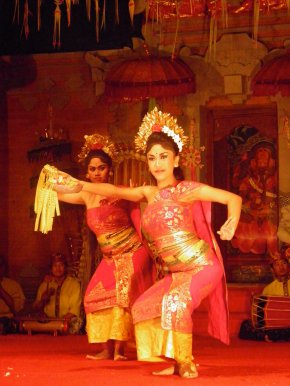 Curiosity got the better of me so we went into Ubud and I bought CDs of Indonesian rock and pop to investigate (I'm listening to the punk band Superman is Dead singing Kuta Rock City right now), at night we attended traditional dance and gamelan concerts (one of steel gamelan in the famous Ubud palace, the other of bamboo in the nearby village of Bentuyung).

I bought a book on gamelan and started to ask questions.

We joined in a local festival then, with a young couple from San Francisco, we hired a knowledgeable driver for a day who took us into traditional homes and ancient temples, down to the impoverished village of Kedisan beside Danau Batur (the lake) in the shadow of Ganung Batur (the mist-covered mountain), tramped off into chokingly claustrophobic jungle near the Elephant Cave, took photos, I made notes . . .

On our final day with a late night flight home we decided to go in to Kuta, then wiser and lazier thoughts prevailed. We stayed poolside.

It was an utterly relaxing day, I felt I could get into this.

And so I had a holiday, and kept a promise to myself: I haven't written a thing about it.

My travel books are here and many "proper" travel stories are here. 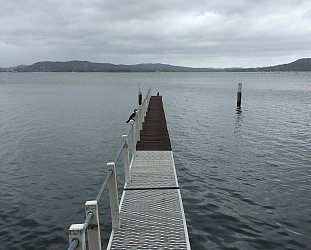