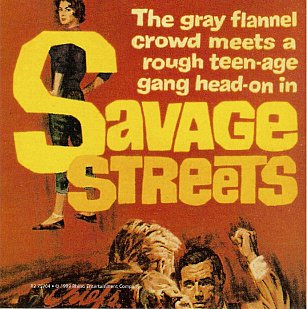 In the final month of the Fifties, the Viscounts covered this piece which Ray Noble and His Orchestra had introduced two decades previous.

But to it the Viscounts brought a sleazy menace in the simple bass line and shimmering guitar behind a saxophone sound which comes at you from a shadowy back alley. It reeks of film noir sensibility.

This moody track was included on the excellent Loud, Fast and Out of Control collection of rock'n'roll (reviewed here)  . . . which explains the voice right at the end.

The placement of this track (and that voice) in the box set is interesting and clever. It is the last track on the last of the four discs and because the song came out in December 1959 it seems relevant.

Within a month it would be the Sixties and the sound of Motown then British pop would do the job of finishing off Fifties rock'n'roll rather better than a DJ smashing a few records.