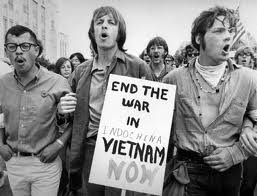 The war in Vietnam threw up hundreds of songs -- taking about every political position imaginable -- but this track is interesting as an early example of a musical montage.

Not a "song" as such but a medley of vocal samples (including one from American Vice President Spiro Agnew), sound effects and hooks from anti-war songs by Neil Young and the Plastic Ono Band, this piece was never destined to be a hit.

Coast were just unknown session musicians and the people behind it were drummer/producer Martin Brummer and Gene Busnar who went on to have low flying careers in and around the music industry.

This "song" is included in the remarkable box set; Next Stop is Vietnam; The War on Record 1961-2008. (Mentioned previously at From the Vaults here)