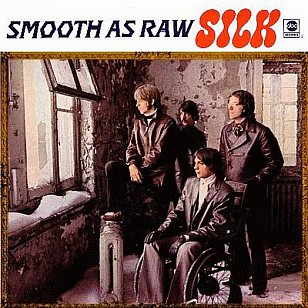 As those who visit these pages know, Elsewhere often buys albums on the basis of their covers (see these articles on Shameful Record Covers I'm Proud to Own).

Some of those were bought for their tackiness, oddity or kitsch quality. A few others because a name in the band went on to do something more interesting, or worse.

The sole album from Silk in '69 however puzzled me. The name seemed vaguely familiar (not to be confused with the Silkie, of course) but no one in the band had a name even vaguely familiar.

However there was that mysterious something . . .

The man in the wheelchair perhaps? The faraway looks? Production by Bill Szymczyk who worked with BB King, hard rockers like the J Geils Band, Joe Walsh and subsequently the Eagles and Bob Seger?

Anyway, for $8 it was worth finding out what Silk did . . . and they did rather too much.

There is post-Association/Beach Boys harmony pop alongside wonky country, Skitzo Blues which sounds like it should have been on the Country Joe and the Fish's psychedelic debut and Come on Down Girl which throws them back a few years to an early Stones album as a reference point.

It's an odd one (side two much better than side one), I learned songwriter/singer Michael Gee later became Michael Stanley and had a decent MOR/hard rock career in the Seventies and early Eighties and . . .

And that with this country-flavoured weeper Custody they offered an exceptional piece of emotional schlock right up there with sentimental nonsense like What is a Boy from the Fifties and Bobby Goldsboro's Honey of the previous year.

It is almost offensively awful (the recitation is by Szymczyk) and the only thing we can say in Silk's defense is none of them wrote it. And aside from Michael Gee none of the others seem to appear on it.

Why they would include it is a mystery however. A joke? Let's hope so.

But did you laugh, in a good way?

One of the tracks on this album, "Come On Down Girl" got a bit of airplay at the time on Radio Hauraki (broadcasting taped programming from the Tiri II in the Hauraki Gulf). A New Zealand band (Natural Gas) recorded a version of "Come On Down Girl".