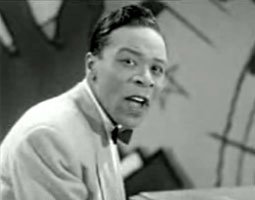 No matter how innovative a musician can appear to be, you can almost always track down a predecessor. There usually seems to be someone who was doing something similar a little earlier, most often to no great acclaim.

The impeccably attired boogie-woogie pianist Maurice Rocco from Ohio was, however, widely hailed for his lively style and he appeared in a number of movies (notably 52nd Street in '37) and, especially later with his Rockin' Rhythm Boys in the Forties, offered something which fell just a whisker short of the rock'n'roll which was to come.

Although, to the best of my knowledge, Little Richard never cited Rocco as an influence (he never credited anyone as an influence claiming loudly to be utterly unique) you only need look at Rocco in performance -- standing up playing, eyes rolling and sometimes fluttering, and that direct gaze to camera/audience -- to see something of Little Richard who turned all that up to 11, with make-up.

Like Little Richard and later Elton John, Rocco would kick away the stool and get down to some serious boogie-woogie business, and he toured to Britain in the late Forties.

Born in 1915, Rocco -- real name Maurice Rockhold -- was classically trained and spent a brief period in Duke Ellington's band before branching out on his own with his own style which was considered flamboyant for the times. And the man could play.

Where can I find the video clip for Darktown Strutters Ball? It was on youtube some months ago, but now it seems to be taken down. 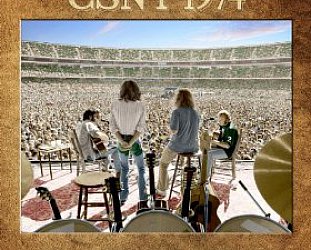 Here's an early exclusive for you. In a month an album drawn from '74 concerts by Crosby, Stills, Nash and Young will be released for the first time. It comes as a single disc (for the... > Read more