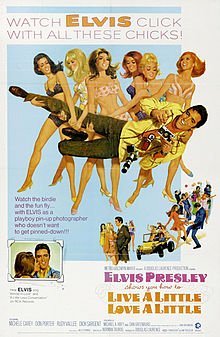 By the time Elvis Presley's execrable film Live a Little Love a Little – he plays a photographer/Lothario – was released in '68 he was a man rendered irrelevant by the rapidly changing times.

The film attempted to get hip more than a year on from the Summer of Love and Sgt Peppers. While some people were tuning in, turning on and dropping out, Elvis was still doing his smouldering hunk with the gals (there's some considerable “inappropriate behaviour” in the film) and having irrelevant inserts into the plot for him to do his karate.

His love interest in the film Bernice (Michele Carey who was always a bit-part player) was an emotionally disturbed woman with multiple personalities, but mostly this is a mundane knock-about comedy . . . with damn few songs.

There were only four in the film, which means lots of talking, pratfalls, fashion shoots (hippie chic Vs Vogue) but there was considerably more sexual activity – implied and obvious – than in his previous films.

But by this time few people were watching let alone listening to Elvis.

The sole single from the soundtrack A Little Less Conversation died in the charts well below the US top 50 and it wasn't until the 2002 remix by Junkie XL (from a different take) that most people heard it.

However also in the film, but even more marginalised until recently, was the somewhat bizarre Edge of Reality which is accompanied in the movie by a surreal dream scene (although Elvis quickly reverts to type with dancers after the weird effects).

However Edge of Reality is an odd song in Elvis' extensive canon, a kind of Orbison-on-acid thing with big orchestral backing, and it was written by Presley's almost in-house team of Bernie Baum, Florence Kaye and Harvey Zimmerman (aka Bill Giant) who contributed to most of Presley's Hollywood musicals.

At the time the world was full of songs about the edge between the real and unreal – it was the drugs – and although Elvis' song revolves around a woman rather than the cosmic wheel and such, it remains one of his lesser but more interesting songs.

But, as said, no one was listening.

Earlier in the year he'd made his impressive '68 Comeback on television but after his film flops of Speedway then this one, it was clear Presley had some way to go to really capture the hearts of former fans and drug-addled minds of a new psychedelic generation. *

Regrettably he never quite managed to do either.

And even though Edge of Reality is very interesting, his heart wasn't much in it either.

The film is a valuable 90 minutes wasted.

* Correction: a reader with a better Elvis chronology has pointed out Elvis began filming Live A Little (in March, released October) before he filmed that impressive special (starting in June, screened in December). Thanks Chris. 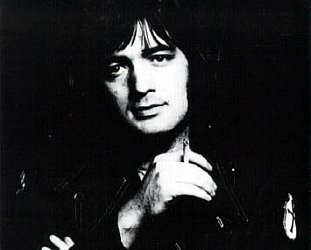 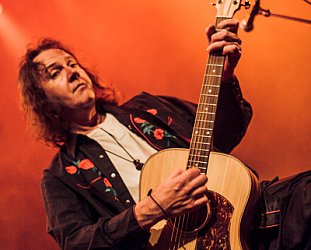 Bob Geldof once said that “rock music of the Seventies was changed by three bands: the Sex Pistols, the Ramones and the Saints”. The Saints out of Brisbane were certainly the... > Read more