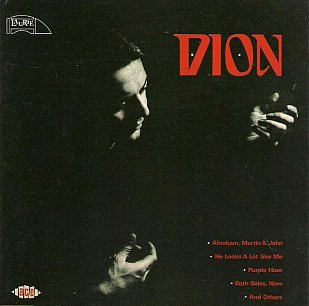 Sisters of Mercy was on Leonard Cohen's debut album Songs of Leonard Cohen and thus was his birth – at 33 – as a recording artist.

For Dion however, who'd had a lengthy career on the pop charts and was something of a teen idol, it was a rebirth when, at almost 30, he looked to songwriters like Dylan, Fred Neil, Joni Mitchell, Hendrix and Cohen on his new direction album which was simply entitled Dion.

Regrettably the album didn't work for him in terms of sales – despite the inclusion of the huge hit Abraham Martin and John – but was much admired by critics and mature fans. Aside from the odd chamber music setting, Dion brings a keen understanding to the lyrics which Cohen later said he wrote in just one sitting, “that never happened to me before. Or since”.

Lots of interesting Cohen quotes and such in the thick booklet also.

Terrible. What was all that phoney baroque winkydink? The Dion of Runaround Sue was brilliant.