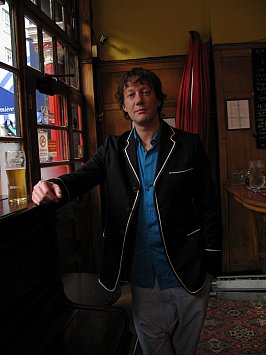 About 45 minutes into the conversation in a noisy café just around the corner from Neil Finn’s studio where he recorded his new album Music For Cocktail Lovers, Nathan Haines mentions casually that this is his seventh album.

Murray Thom -- prime mover behind Music For Cocktail Lover and on whose label the album appears -- seems surprised to learn this. And then, typically, he shrugs it off and gets back to a little pleasant hard-sell about how great the album is.

He needn’t try quite so hard -- although Thom is an enthusiast for his projects and it just comes naturally to him -- because Music For Cocktail Lovers (despite a title suggesting a quick, generic cash-in for Christmas) is a damn fine album any way you cut it.

The only question which hangs over it is this: is it a Nathan Haines’ album?

That’s an unequivocal yes -- and no.

Haines is credited as producer and he certainly plays flutes, sax and keyboards on it, and it was Thom and he who negotiated it into shape -- but he also doesn’t play on every track and frequently in this free-flowing and friendly conversation he repeatedly comes back to the point that he “produced” it.

Not that such fine slicing of definition will trouble those who hear it, but Haines is rightly proud of being sole-charge producer for the first time. 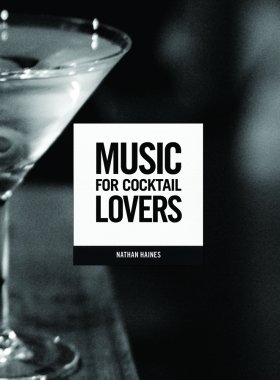 He’d co-produced previously -- but Music For Cocktails Lovers is his alone. Thom only came to the studio for one day -- although as Thom says, repertoire and arrangements are his thing.

When it came to repertoire it was going to be simple: Thom approached Haines with the concept, they batted around some material (“I told him I couldn‘t do cheese, I had to do it my way“, says Haines) then when it seemed they were getting nowhere Thom came back to him and said, “Okay, forget all that. Let’s start from scratch”.

“Initially I was wary and reticent,” says Haines, “but then when Murray said, ‘lets forget about all that‘, that’s when it go into it.

“I can be a fix-it man, I’ve done a lot of that on people’s albums, but when he said let’s do it from scratch, that’s when I got excited.”

Haines admits he had never heard Jamie Cullum’s version of Frontin’, the piece International Flight or the track Give It Away by UK trip-hop outfit Zero 7 which Thom suggested, the latter being a real surprise.

Thom’s previous projects have included the faithfully MOR albums Piano by Candlelight and Moonlight Sax, but the Zero 7 track comes with beats, “the first of Murray’s albums to have beats,” says Haines with a laugh.

“Then when I started to give my favourite tracks to Murray and he was receptive I thought, ‘this could be fantastic‘. And for me being producer it meant I got to get my production chops up in a different area.

“The difference with this record and my others is there is only one original song, and whereas my last record took me the best part of a year this was like, ‘here are the tunes, these are the versions, here are our reference points and we want them to sort of sound them like this’. “

Haines says once he had booked the musicians and sent them the tracks, they had “the luxury of a month” in Neil Finn’s studio, then there were three days mixing.

The musicians he assembled include some he has worked with frequently (his guitarist brother Joel among them) but two weeks before they were due in the studio keyboard player Kevin Field was in a car accident and hospitalised. Not that it seems to have hindered his playing (although Haines had to do some of the more simple Rhodes parts early on) as it is a highpoint on the album.

Many of the tracks were recorded live and Haines says those were the easiest to mix, others came from post-production edits.

“I loved some of the longer pieces but I was also aware I was making a different sort of record. I could use the word compromise, but I don’t think it was that at all, it was just my awareness that I was doing something for Murray and putting my name to it as a producer. And in the big scheme of how the whole album ran, the full seven minute version of [Joni Mitchell’s] Court & Spark just didn’t sit with the rest of the record. But I might release that one day.

“I listen to a lot of jazz records obviously, and there are edits all over the place in the 50s. If you listen very carefully you can actually hear them, like on Art Blakey through to great Coltrane records, everyone of the era would use very musical edits between takes. So we did some of that.”

He is especially pleased with their version of the Ahmad Jamal piece Poinciana and how they achieved a similar sound to the crackly old vinyl he learned it from.

The studio should also get credit: “It brings a quality to a recording that I’d never been able to achieve before -- which has opened my eyes to the fact that this is how great records get made; the combination of great musicians, good production and the right equipment.

“The Neve desk that they have I probably worth a quarter of a million dollars, the sound it gets doesn’t go apart like in the digital domain.

“It brings things together,” he says, locking his fingers by way of illustration.

A feature of the album is that Haines plays a lot of flute, and he admits he now has a love-hate relationship with the saxophone, a sound which he considers “old fashioned in some way” and would have brought a quality to the album which would have limited its appeal.

He may be right, and certainly the early feedback has been very positive.

“My friends like it because it is not too intense but that it also has a lot of different elements. My girlfriend loves it .  . and my mum says it’s the best record I’ve ever done,” he laughs.