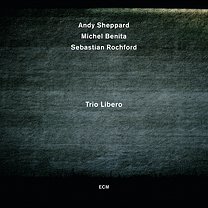 This elegant and sinuously lyrical album features two generations of British jazz musicians; saxophonist Andy Sheppard who came to prominence in the post-Marsalis years in the Eighties alongside Courtney Pine in the vanguard of UK scene, and drummer/composer Seb Rochford (interviewed here) whose geometric style comes full of odd angles and accents which launched him into the spotlight more recently with the bands Polar Bear and Acoustic Ladyland.

The other point on the triangle is French bassist Michel Benita whom Sheppard had met while living and playing in Paris in the Eighties.

Sheppard's previous ECM album was very different (tabla player, electronics) but these spare pieces are full of space and languor and they stretch easily as Sheppard's long Garbarek-like tone moves across a backdrop of arco bass and subtle percussion punctuations (Spacewalk Parts 1 and 2).

Or there is that barely-there quality so familiar on ECM recordings (Dia Da Liberdade), although despite it's title Land of Nod has a bounce in its step as Rochford lays down enticingly unusual patterns before Sheppard enters with a quirky melodic line.

So just when you come to expect the familiar, the direction changes and bends the music into different and enjoyably odd shapes.

The woody ballad The Unconditional Secret at the midpoint again recalls Garbarek although Sheppard has a warmer tone, and Lots of Stairs is like tone poem of haiku economy.

Most of these pieces are credited to the trio and were worked out from sessions of pure improvisation, and that lends coherence to an album which succeeds through understatement and seductively simple melodies played with deep emotional attachment.

Quite the quiet gem.