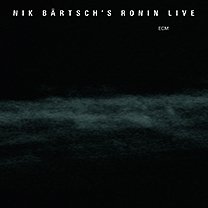 A previous album by this often melodically minimalist, rhythmically propulsive and effervescent group around keyboard player Bartsch -- Llyria -- was singled out as one the Best of Elsewhere in 2010 and this double live disc recorded at various venues between 2009 - 2011 confirms that they are something special. And different.

Young, vigorous and playing with a constraint which sometimes just has to be let go into explosive playing and dynamics, Ronin sometimes come off as Steve Reich with an injection of funk, the soundtrack to a film noir starring Orson Welles and Klaus Kinski ( a double whammy of different kinds of menace) or a post-rock band with some serious jazz chops. There's even a bit of pulsing Afro-juju beat in the piece recorded in Tokyo.

Each of the pieces here -- improvisations averaging around the 10 minute mark -- is billed as a separate "modul", a hint that you can see these as refractions of their collective personality all coming from a similar but distinct emotional place.

With two percussion players, the music is grounded but also capable of sudden bursts of exciting kinetic energy.

The repetition might put more conservative ears off, but Ronin are seriously good if challenging.