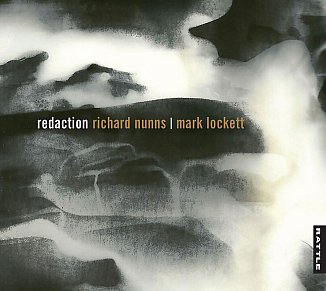 The background to this recording -- conceived as spontaneous improvisations between taonga puoro master Richard Nunns and percussionist Mark Lockett in conjunction with an audio-visual installation by photographer Veronica Hodgkinson -- is outlined in the booklet for this cutting edge album, which could perhaps find no other home in New Zealand than on the increasingly daring Rattle label.

In the past decade or so, Nunns has pushed well beyond the often austere and spiritual sound of the various flutes he plays, and here in a piece like the abrasive Revival with Lockett driving relentlessly, we are more in the territory of an avant-garde innovator like percussionist Roger Turner jamming with Russia's free jazz practitioners of the Eighties, the Ganelan Trio.

In other places however there is nuance (the skeletally spare Routine Inspection), sonic landscapes (the busy Extinct Species), some left-field funkiness from Lockett (the too-brief Two Minds) and quizzical little pieces (Tripped It is just kinda fun).

And the whole thing opens with the joyously boisterous title track where Lockett lays out a lively pattern and Nunns' voicings call out across the ages in a yearning manner, and closes with the 16-plus minutes of La Morte which has a foreground of what sounds like gently but incessantly brushed cymbals then distant, emerging taonga puoro and . . .

Produced by Jeff Henderson -- who gets co-writing credit on all but one track and sparingly lays in other discreet sounds, notably on that closer -- this is art music created for a specific purpose, but for the open-minded this will be a challenge and discovery.

For more on Rattle and Rattle Jazz releases at Elsewhere see here.

Greymouth-raised singer/pianist and composer Jan Preston may have been classically trained but her career in New Zealand saw her best known as a member of the innovative Red Mole Cabaret theatre... > Read more