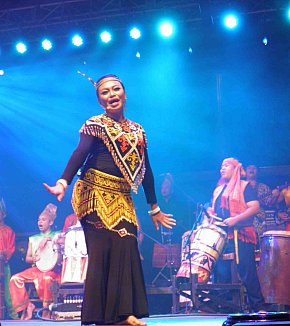 Every music festival likes to think of itself as unique, and by definition it is. The location and cultural context – which create the ambience – as well as the different roster of acts ensure that every festival is a one-off experience, even those which take place year after year.

But it can be interesting and even useful to compare festivals which have nominally a similar ethic: in this instance festivals of world music.

If we line up the New Zealand Womad in Taranaki (2014 was it's 10th year) against the Rainforest World Music Festival in Sarawak, Borneo (17th this year) there are some stark differences.

The most obvious goes with out saying, but let's say it anyway: in Borneo Malaysia it was about 35 degrees every day. Taranaki might wish for heat like that. Even when it rains in Sarawak it is warm but the brief downpour cools the air. When it rains in Taranaki you get wet and cold, and this year there was doom'n'gloom from forecasters who predicted a bitter storm-level lashing.

If you are planning to go to a festival, the weather will be a major determining factor.

But let's not dwell on that.

The biggest difference between the rainforest and Womad I saw – aside from more acts from around Malaysia and Indonesia on the bill alongside French artists, a group from Tanzania, the wonderful Stefan Micus and so on – was in the age of the attendees.

The median age of people at the Rainforest Festival would have been about half that of New Zealand's Womad. There are a couple of key reasons I think: New Zealand's Womad has long been considered a very safe and secure option for baby boomers, especially older single women. The atmosphere is supportive and non-threatening, the site safe and the music appeals to the curious older listener.

In the recent book Soundscapes of Wellbeing in Popular Music, a collection of academic essays about the healing power of music and its use in therapy, Professor Robin Kearns of Auckland University's School of Environment wrote a fine piece about exactly that aspect of Womad. 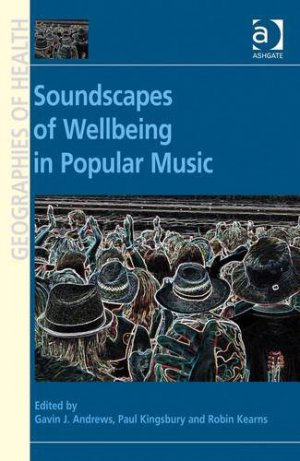 With specific regard to the music, in New Zealand the older people seem more adventurous (they've had pop all their lives and are looking for something different) than the young with regard to world music.

New Zealand's geographical isolation means young people have fewer encounters with music from other cultures on any regular basis. A Diwali once a year isn't enough.

No music school that I know of deals with it, and when I go and speak for two hours about world music at MAINZ in Auckland it is a rare student there (and they are all music people) who has anything beyond the most superficial encounter with music beyond their own narrow wavelength.

That strikes me as a problem on so many levels I won't even go into it here.

The difference in Sarawak also is there are a lot of younger people moving through. The nearby city of Kuching – one of my favourite in this region – is the gateway to Bako National Park with its proboscis monkeys, walking trails and so on, there are orang-utan wildlife sanctuaries just 40 minutes away (cheap too, less than $10 entry), and plenty of adventurous pursuits which can be done on the cheap. 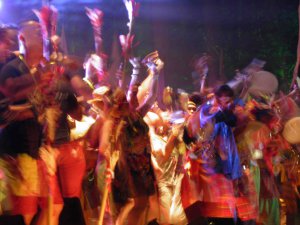 So Sarawak has the advantage of a mobile and curious population of young people passing through, as opposed to the Taranaki Womad which has to pitch itself to the New Zealand audience first.

But it is an aging demographic and if this year's inclusion of Kimbra – who was just road-testing her new songs in my opinion – was a pitch for the younger demographic then it might not have been as silly as it seemed.

My guess is though that young New Zealanders at home (those under 30) are not as musically curious as those who are backpacking through south east Asia. Those people see a festival with names from all over the world and then put it into their itinerary. It's a chance to party and dance, and meet people like themselves who are also in transit. In Sarawak the beer costs about NZ$3 a can, a plate of food about the same, so it's a cheap attraction.

But let's be clear: the Rainforest festival had some serious flaws, not the least being the terrible and generic food served up buffet-style. I am told one supplier got the contract for the festival which explains why everything was the same and most of it awful.

The Sarawak site is well established – it is a cultural park when it isn't festival site -- with plenty of performance spaces large and small and, in the amphitheater area, two stages side-by-side which alternated Big Day Out style. It worked a treat and the whole event was highly professional, especially the filming of acts to project on the large sidescreen.

The question I am considering though is how to get a younger demographic to Womad. It's comparatively expensive (tickets, accommodation and food) and it is a destination in itself with few ancillary entertainment or experience options nearby.

These too are determining factors when making a choice about whether to go to a festival.

And the Taranaki Womad – and I'm told this year a massive majority came from Auckland rather than Wellington – is something you have to commit to going to. New Plymouth is not exactly a place you, or tourists, are passing through.

So after the Sarawak experience – where I felt positively parental as opposed to being with my peers at the Taranaki Womad – I believe there are some questions the organisers in New Plymouth might need to address: not the least how to ensure a future when one demographic is moving on and there might be a much smaller one coming in at the bottom.

One final thought though.

On the final day in Sarawak when I was at the site, late in the night I decided to take a seat at one of the large platform and verandah areas where I had been previously when I needed a sit-down.

There was something different however: the night before a very large tree had blocked the view of the stage from this position, on this night the tree was gone.

The organisers had had chopped it down.

I am still trying to figure out if – at a festival which is very much about preserving tradition and being eco-friendly (it's slogan invoked the word “green”) – that was a bad thing . . . or a pragmatic decision because it let the paying public have an unimpeded view of the stage.

More though, I wondered if that would have happened at Taranaki.

I somehow doubt it.

That's interesting Graham. I get a bit sick of people trying to interpret what baby boomers do tho! To attend Taranaki in comfort, which I definitely think baby boomers now want.... You have to be well organised to get your cheapish flights, your decent accommodation ... Not some uninspiring chain hotel/motel..... Or be prepared to drive that tedious journey from somewhere else , in my case over 5 hours. I started looking in early January for flights and accommodation, found nothing. Maybe if it was hosted closer to a large city a wider range of people would drive out for the day. But is Womad Taranaki worried about this? GRAHAM REPLIES: Part of what I was airing there is that as the demographic moves upwards and older folk choose not to go -- perhaps for the reasons you mention -- will there be a younger demographic coming in to take its place. Not if they have no interest in world music, I suspect.