Many years ago I went to a circus, one of those real old fashioned ones with jugglers, a tightrope walker, clowns, acrobats and so on. No animals of course – although I'm ashamed to say I would have liked to see a lion tamer or a dancing horse – and it was all very low-rent.

It was one of those traveling shows under a Big Top (which was actually a Modest Top) and you felt very up-close.

I can well remember the young tightrope walker – the rope just a couple of metres off the ground – and how my heart was in my mouth as she negotiated this slack string. Every hesitant step was a dance with disaster. As it was with the very young acrobat on the rings who looked utterly terrified that something might go wrong.

I had the impression that maybe these people were doing this for the very first time, it looked that desperate.

There was no sense of highly schooled professionalism, and the “tricks” such as they were, were very simple.

But that is what I liked about it.

These days we perhaps expect more from our circuses, we expect them to be big production jobs with lighting effects and music and maybe even some kind of theme. The old-school circus looks exactly that, just old fashioned. 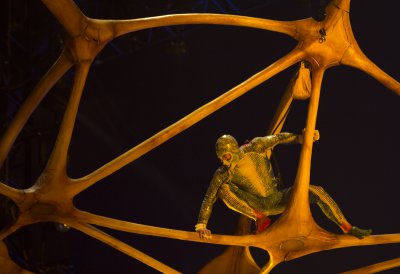 I suppose in large part we can attribute the change in expectation to the increasing sophistication of generations brought up on television and the theatre of rock concerts, and especially to Canada's Cirque du Soleil who have turned old-school circuses into elaborate productions.

Formed in Montreal in the early Eighties and now a global operation, they have staged -- that is the only word to use -- about 30 productions and the Cirque designers moved into pop and rock culture with their shows based around the music of the Beatles (Love), Elvis (Viva Elvis) and latterly a couple of Michael Jackson productions. 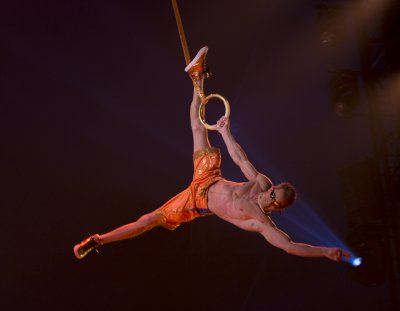 All their shows are executed with slick and engaging professionalism, and some of their performers have worked with Madonna and the like, while others have undertaken solo careers (notably Slava from the Alegria spectacular who created the enormously popular Slava's Snowshow).

Because of the nature of Cirque productions, they attract people who perhaps wouldn't be seen in the vicinity of that other circus I enjoyed so much with its visible sweat, lo-fi sound, cheap production values and almost amateurish acrobatics. 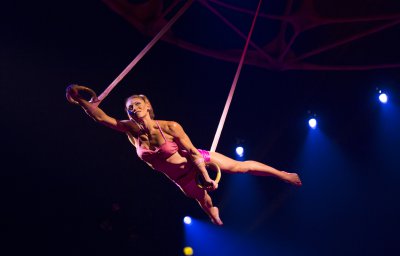 At the opening of Cirque du Soleil's Totem in Auckland last night – the show was first premiered in 2010 and has toured widely before making it to New Zealand – there was a celebrity collision of enormous proportions.

And I was told even the prime minister was there . . which was doubtless a diversion from the sour circus of the kind he is currently going through, and looking less and less like the ringmaster as the days go by.

Totem is, like most of the Cirque productions, thematic (something about the evolution of mankind and mythology) but that is more notional than actual. 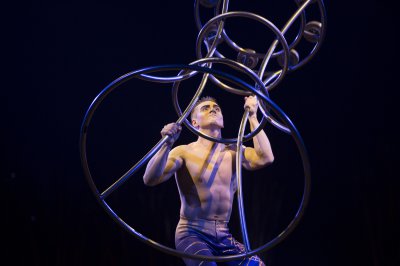 What Totem presents – brilliantly executed, superbly paced and full of gaspingly athletic performances – is a deep immersion into a world of their own making.

As I said at intermission to a friend, the only thing you can compare this to is another Cirque production.

Right from the start when various characters who later appear on stage are wandering through the expectant audience, there is a sense of a magical world being created. And it is a world where cultures are borrowed from, collide, get mashed-up and cleverly thrown together. 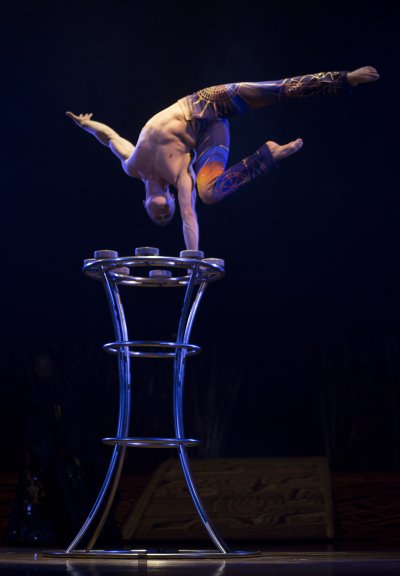 The “Italiano” clown for example is a hoot, so you don't worry that he also says “amigo” and engages in a bullfight; Hopi hoop dancers share a stage with Afro-Cubans, various pan-tribal characters and a soundtrack that shifts seamlessly from Bollywood trance to bellydance.

Totem keeps moving on, looping back on itself when various characters return and delivering stand-out acts, notably the five sort-of Thai/Cambodian women judging by their costumes  – actually acrobats from China – on tall unicycles whose synchronized juggling of bowls elicited whoops of delight and hushed admiration.

Because a Cirque production is so professional it can be the few --- very, very few – mistakes which remind you just how difficult some of these acts are.

Bodies contort poetically, bowls thrown high in the air are caught on the top of another performer's head (all the while they are on precipitously high unicycles), a tiny circular platform is the setting for a physically demanding performance on rollerskates . . .

All executed so flawlessly that one tiny misjudgment with a bowl makes you audibly sigh "Aww" in sympathy. 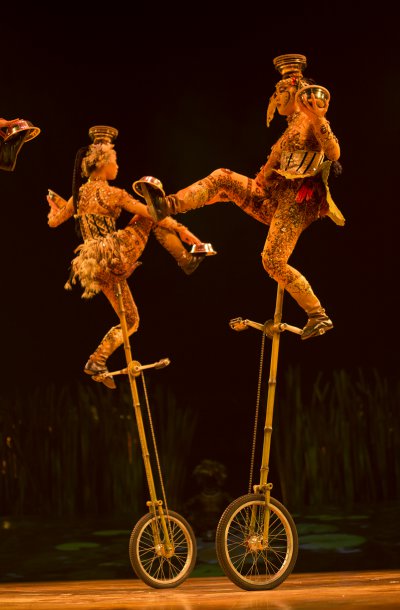 These artists make the improbable seem possible, as with the two women from Belarus who spun weighed blanket things on their feet and hands while contorting themselves into mesmerisingly sculptural shapes.

Or the insanely flexible young gymnast on the swing.

The gymnastics are so meticulously worked out and presented they have an almost algebraic complexity.

Totem – where the drama and humour just keeps coming in costumes which roam from Mardi Gras/carnivale to Inuit (on rollerskates) and Neanderthal – is a constantly revealing delight.

And to these eyes and ears the segment where Charles Darwin (I think it was him) was inside a transparent steam-punk chamber with illuminated orbs while the musicians played something like From Scratch-meets-gamelan was utterly magical. 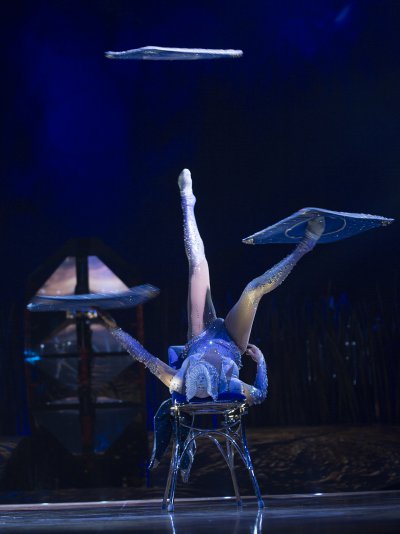 If that description sounds peculiar, you had to be there to get it. Which is true of the whole production.

Totem is impossible to adequately describe and perhaps that is the point.

You need to experience it – maybe even twice – to get it.

What you get is a high-end, professionally executed, often gravity-defying production with an overload of tribal tropes, music of no fixed cultural reference point (the band less a part of this production than some others) and staging that opens with a human mirrorball descending and just gets more breathtaking as it proceeds.

What it all means is irrelevant. It's enough that it just is what it is.

And it is a night of theatrical magic in the context of a circus which will make you laugh, gasp and perhaps even think.

I wonder whatever happened to that nervous wee girl on that slack string from all those years ago? 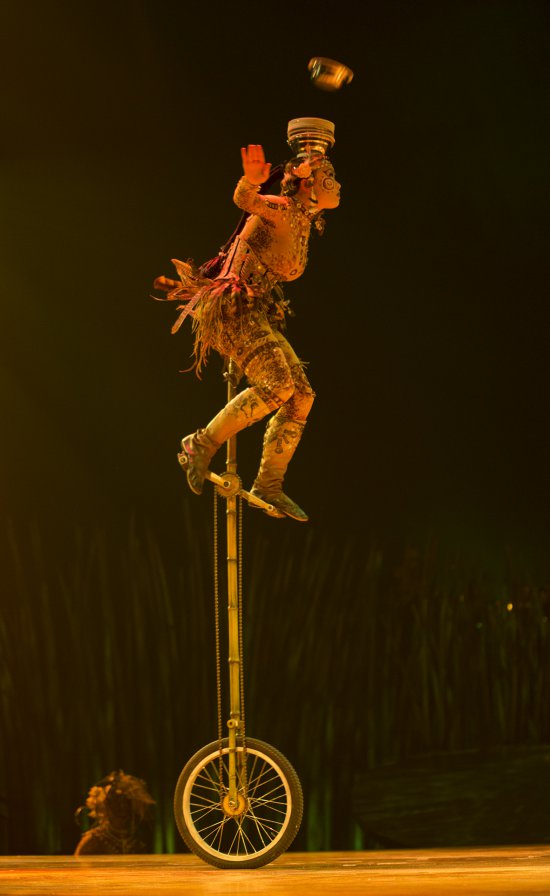 Wow, great review especially the memories harking and contrasting back to a simpler circus era. This is the first Cirque since the one and only I've seen previously (Allegria) that I've really been excited about, hence plans are already underway to rustle up a group and get tickets. All the more motivated now, thanks!

Their best show so far, IMO, in that it was stripped back and simple. The projector images of the sea, desert, water etc on the back stage were cool, the acts (barring perhaps the solo male gymnast) were all engaging and obviously rehearsed to the max. It was a shame that the band was basically out of sight, live music at shows should be celebrated! I was struck at how young they all looked when they shed their disguises at the end. And yes, the shining atoms routine in the steampunk zone was the highlight. Very cool.