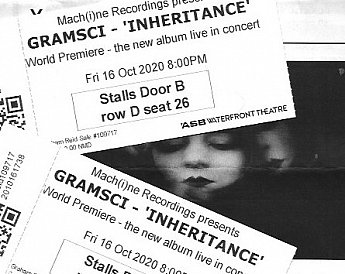 Many weeks ago during the second Covid lockdown in Auckland, Paul McLaney – mainman behind his Gramsci project – spoke via Zoom to my third-year music at Auckland university.

I first met McLaney at some time in the late Eighties/early Nineties when, as a singer-songwriter under his own name, he launched his extraordinary career which has seen him follow that thread but also move into rock textures with Gramsci, and many other directions besides.

His broad and usefully ill-defined “topic” in the conversation with students was about how to sustain a career in music beyond a few singles and/or a couple of concerts.

Towards the end he spoke eloquently about venues, staging a show, giving the performance a sense of occasion.

Perhaps because the new Gramsci album Inheritance – which he was launching finally on this night at Auckland's tasteful ASB Waterfront Theatre – is his acknowledgement of how much alcohol had played a part in his life (“you kid yourself it's a reward, takes the edge off feeling bored” in Tantalus) and his head-clearing sobriety, he spoke about playing in pubs and bars.

These are the places young (and more senior) bands and artists invariably play, but McLaney noted how inadequate they are for the artist: age restrictions mean younger people – those getting into music at 14, 15 and 16 – can't get in; there is always crowd noise from those liquored up; the layouts of such places are often hopeless for the artist and work against the performers . . .

Of the latter just consider: the layout of the old Kings Arms and the Studio in Auckland for example meant people pushing through the audience to shout their drinks order at the long bar down the side, and even the classy Anthology Lounge on K Rd. has the bar distractingly near the stage.

Bars away from the stage often aren't much better: the noise of shouty patrons at Auckland's Galatos and the Tuning Fork is often an annoyance, especially during quieter acts.

So what to do? 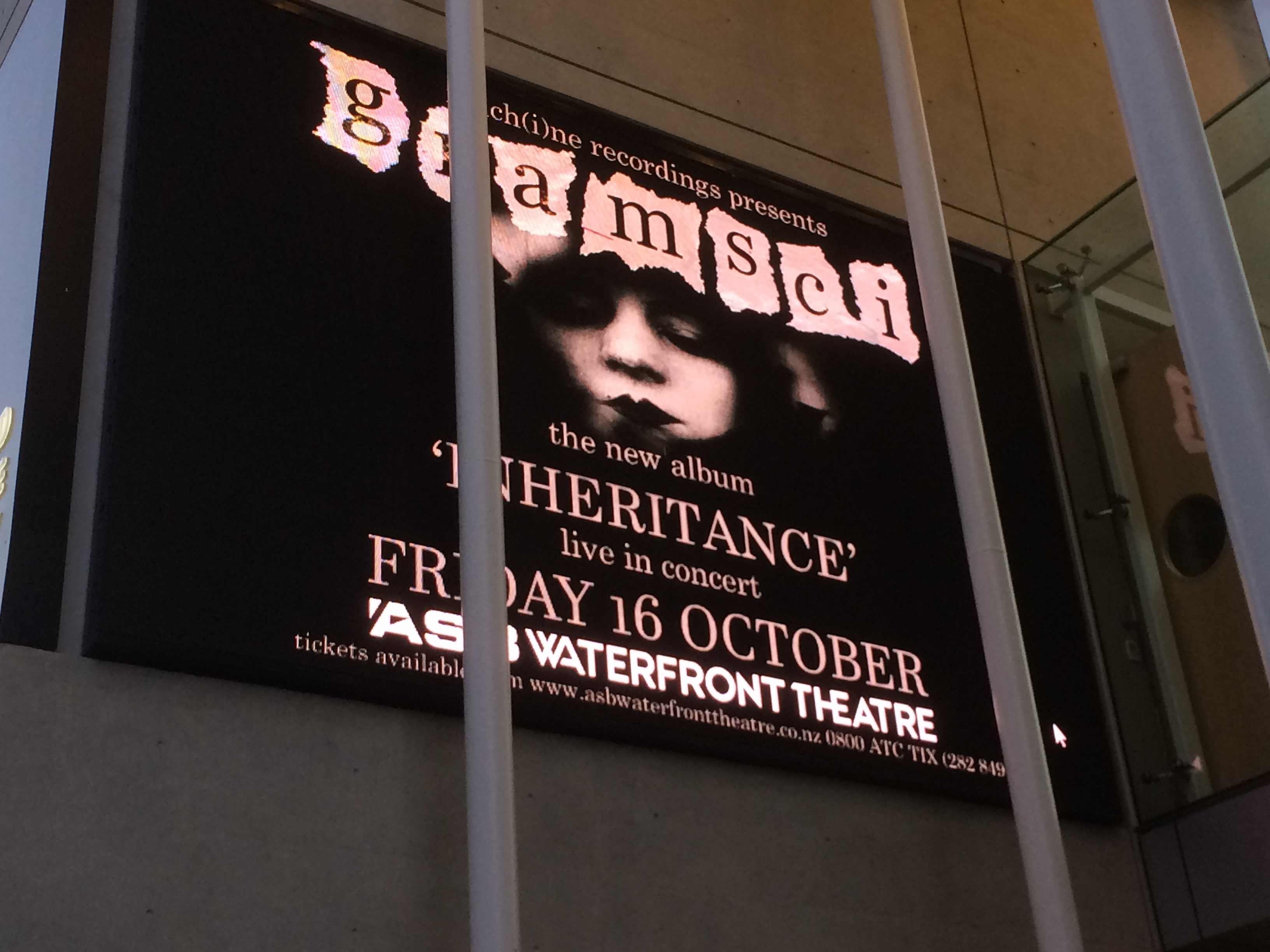 Acknowledging that alcohol is part of the package, McLaney suggested some other options: theatre settings where the audience can drink and catch up before and after the show, can take their drinks in but be seated and watch the show in comfort and with all due attention.

Now obviously that setting wouldn't suit the throng who were at Benee in Spark Arena about two km from where Gramsci were launching Inheritance on the same night, but for McLaney's older audience who were there to listen more than to jump up and down, the ASB Theatre was perfect.

This is not a new idea, 40 years ago Split Enz, recognising they weren't a pub band, played in theatres where they were more in control of the whole presentation.

But the idea is worth considering for some artists, especially – as Enz and Gramsci did – you can “dress the stage” or present a more aesthetically interesting production.

McLaney's show with Gramsci was innovative, engaging and the visuals complimented the music by presented a fascinating point of difference in terms of staging.

As he told me for this article at The Big Idea (before this original date had to be shoved back), he had been investigating some of the earliest non-representational film animation and was going to use that as a projection during the concert.

But not as back projection which is the standard way of using footage. 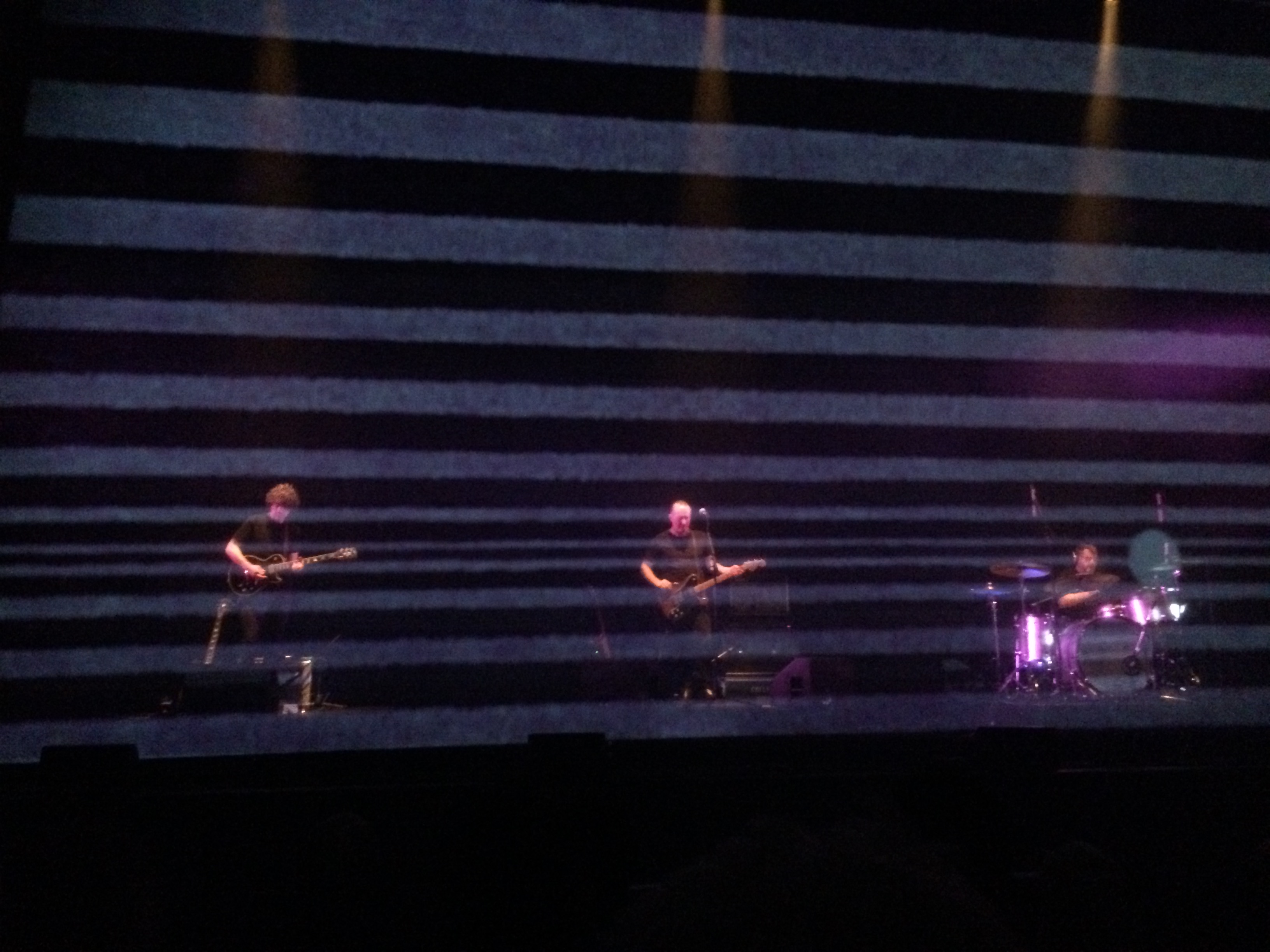 On the night, behind a translucent gauze screen on which the moving abstract images were projected, Gramsci – McLaney, guitarist Jol Mulholland and drummer Greg Haver – could still be seen under ceiling spots.

But the effect was the inverse of a standard rock presentation and the audience could shift their focal points from the screen to the performers who would often appear in stark clarity when some of the animation went dark or simply stopped.

In a presentation which was a choreography of light and sound, the visual images-- along the lines of Norman McLaren, Len Lye and more recently Chris Knox's video work -- had a rhythm which complimented the music.

And this being a theatre, the sound was superb. 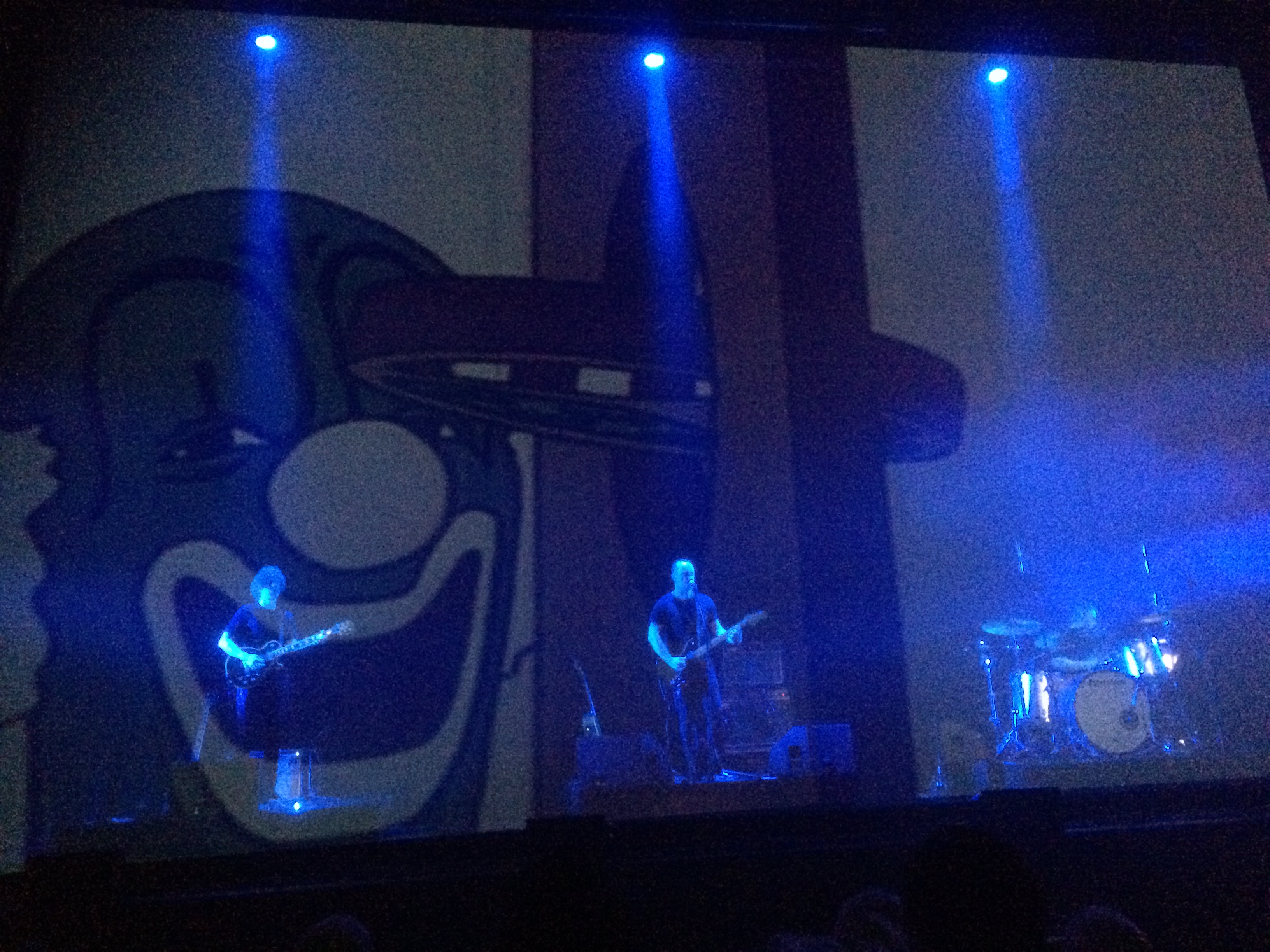 Gramsci's Inheritance album is a kind of cathartic journey and when delivered with the kind of sonic engagement you might expect from a David Gilmour concert (fronted by McLaney who can summon up the emotional power and range of a much less bellicose Bono) this was not just a concert, but an event which had a sense of occasion.

Playing the album in sequence illustrated its dramatic arc: from the deep throbbing heartbeat before the first note was struck which created a frisson of tension and expectation through the brooding Achilles Heel (“I can't say no to you, my Achilles Heel"), the soaring Tantalus (joined by saxophonist Lewis McCallum), the coiled intensity of Like a Scar (“just one drink, because I deserve it”), the instrumental Icarus (which on record seemed very Pink Floyd but in concert channeled more of McLaney's beloved Peter Green's blues) to the elevating and more optimistic denouement Atlas. 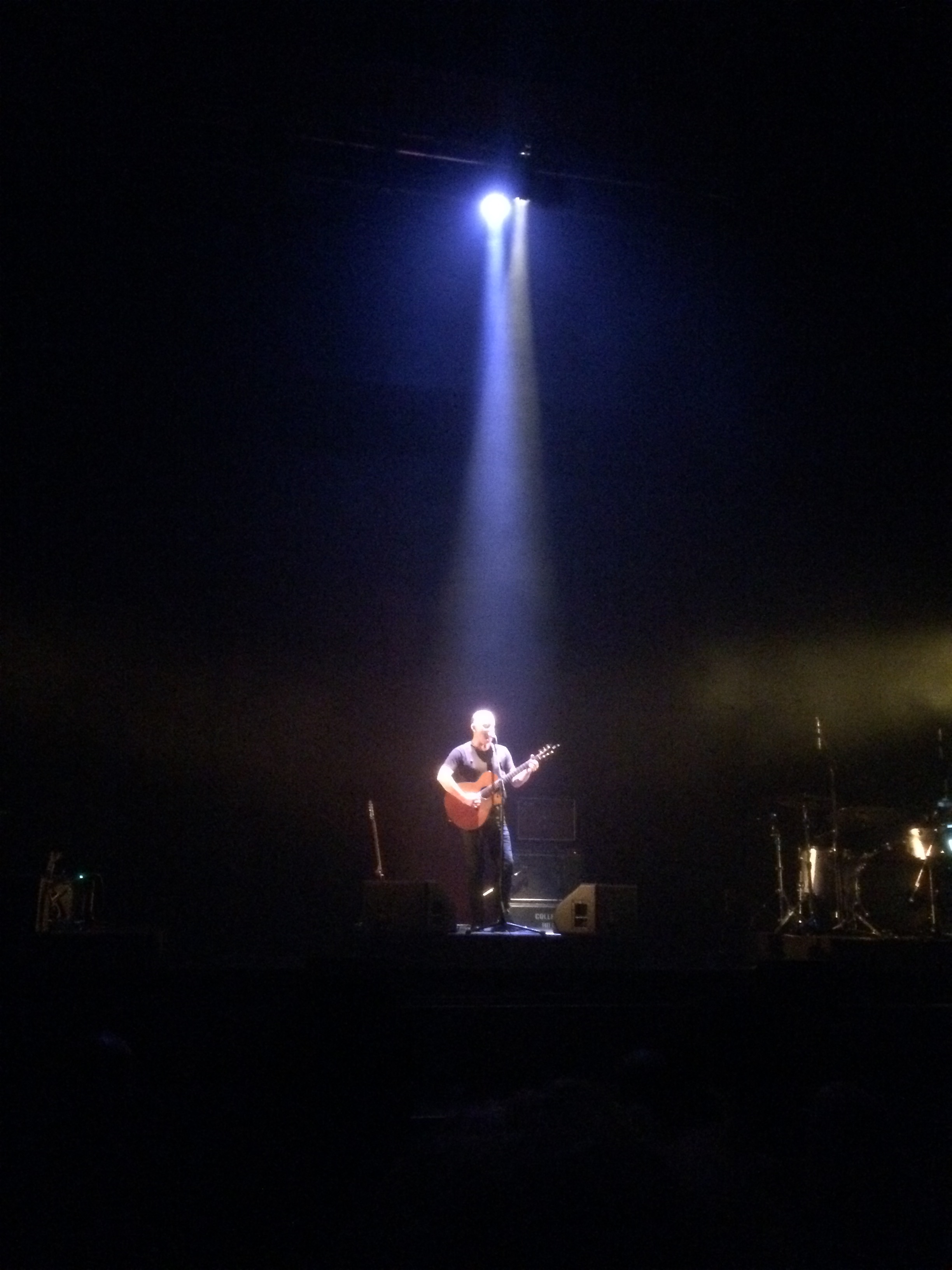 Between songs the images floating in space in the foreground would also come to a natural pause.

Playing an acoustic set then being rejoined by Mulholland and Haver, McLaney presented not just an utterly engaging, personal and intelligently realised show but also made the case for certain acts to look beyond the bar or boozy club to venues in which they could craft a more ambitious conception.

Won't suit everyone of course.

But as McLaney's songs and this unique concert showed, there's life beyond the alcohol.

For many decades, many New Zealand jazz musicians have done what the league players call “the hard yards” . . . jazz players were in high school bands (Grammaphone), navy bands,... > Read more