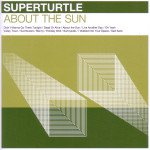 Mainman behind Superturtle Darren McShane certainly has prior form, among other things he formed Chainsaw Masochist (on Flying Nun, for those old enough to remember) and more recently he was in Figure 60 as well as having been a sound engineer -- which is how he met some of the fellow travelers here (bassist Ben Furniss from the Broken Heartbreakers and White Swan Black Swan, and vocalist Jude Morris who came in to do some demos).

None of which may prepare you for About the Sun with its knowing and sometimes wry dollop of post-New Wave pop and touches of classic Fifties sounds on snappy sub-two minute, hand-clap songs like Oh Yeah . . . which spirals off into Nun-like guitar psychedelics.

And Holiday Well (see below) could have taken its melody from a hit in the middle of any of the past five decades.

This also sounds terrific in a sharp lo-fi but crisply produced way -- it has real presence -- and that just enhances the effect, which might be you want to get out a mid Sixties Tommy James and The Shondells album.

Nick Lowe billed one of his albums as "pure pop for now people". This is sort of pure pop for people who remember then, now.