Subtitled “Early Black Rock'n'Roll” these two parallel volumes (Roll is 1948-58, Rat is 1949-59) pick up some classic, dirty, thrilling rock'n'roll from the time before and through the Elvis Presley years, but often sound much more scandalising and sexualised than even The King.

So across these two discs – and you need both – are the great Ike Turner (You've Got To Lose, She Made My Blood Run Cold), the menacing Howlin' Wolf (You Gonna Wreck My Life, Poor Boy), the leather larynx of Etta James (W-O-M-A-N, Nobody Loves Me Like You Do), Sister Rosetta Tharpe (Jericho, Can't No Grave Hold My Body Down) and less familiar tracks by the likes of Little Willie John, some early Chuck Berry, Johnny Guitar Watson (the terrific and silly Space Guitar), Slim Harpo, Otis Rush, Bo Diddley . . .

Generations of white musicians have listened to and lifted from this urgent, evocative music (the Stones to George Thorogood and beyond) and it semed to been secretly encoded with hard truths. 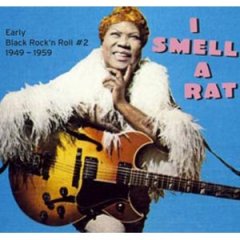 This was “race music” at the time and so was speaking directly to an almost exclusively black audience and you can hear in some instances how it morphed and was often diluted so it would cross over.

But on these 50 tracks there is a raw, lo-fi urgency – and sometimes a menace -- that comes off as a force of untamed nature.

The ideal companion volumes to those terrific sets of The History of Rhythm and Blues (see here) which fill in the broader picture.

A reminder that rock'n'roll was black well before Bill, Elvis, Jerry Lee and Buddy.