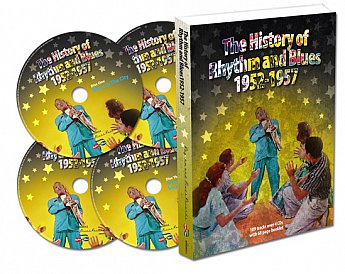 The first two volumes in this 4-CD series which traces the history of old style r'n'b have already been acclaimed at Elsewhere here and here respectively.

These multi-genre, colour-blind, cross-label and highly inclusive collections not only cherry pick the most significant artists and songs in the growth of r'n'b but also intelligently include extensive selections from other genres (the blues, gospel music, jump jive, New Olreans music and doo-wop) which ran parallel.

These are beautifully packaged, big picture collections and all should be in any intelligent music library.

But this volume is undeniably essential for those who come into the story with the beginnings of rock'n'roll in the early and mid Fifties.

If that previous 1942-1952 collection laid the ground, this collection of 109 tracks over four discs -- again handsomely packaged and with extensive scene-setting notes and with pointed biographies of the artist/songs -- delivers a history lesson with a helluva backbeat.

As before the Big Names are all here on the second disc, Rockin' the House: Bill Haley and the Comets (Rock the Joint from '52, with exactly the same guitar solo as in Rock Around the Clock!), Ruth Brown in a devastating live version of Mama He Treats Your Daughter Mean, Big Mama Thornton's original version of Hound Dog from '53, Big Maybelle with Whole Lotta Shakin' Goin' On (over a year before Jerry Lee Lewis cut it), Big Joe Turner, Smiley Lewis (Hear You Knocking), Little Richard (Lucille), Screamin' Jay Hawkins (I Put a Spell on You), Chuck Berry (Brown Eyed Handsome Man) and Dale Hawkins (Suzie Q) among others.

And that is just one disc.

And Street Corner Sounds brings in the styles of cool ballads and doo-wop which filtered so effortlessly into Motown soul in the hands of Smokey Robinson and the Miracles, the Temptations, Four Tops and others. Here are classic doo-wop gropups: the Clovers, the Drifters, the Moonglows, Hank Ballard and the Midnighters with their salacious Work With Me Annie, the Marigolds, the Coasters . . .

And the final disc is entitled This Soul's on Fire, so welcome Ray Charles, Otis Blackwell, Little Willie John, Etta James, Jimmy Forrest, Johnnie Ray (Whiskey and Go, not his sentimental schlock like Cry), the Soul Stirrers fronted by the young Sam Cooke, LaVern Baker, Johnny Ace, Solomon Burke, Lloyd Price . . . and it closes with James Brown's Please Please Please, which ushered in a whole other era and soul sound.

Classic songs (and important marginalia) are everywhere here -- and their influence came through the generations: even a quick scan will alert you to the fact that these songs not only stand in their own right but provided source material and a career direction for Elvis Presley, the Beatles, the Rolling Stones, Van Morrison, the Animals, the Band, Bob Dylan and others --- but more recently they have also infected the spirit of Amy Winehouse, the White Stripes, Black Keys, James Hunter . . .

There are any number of collections of music from this era, but most just grab the obvious songs and little more. This set -- as with its predecessors which form a vast body of important music of the 20th century -- does much more than that: it places the music in the context of its time with those genres and fellow artists whose sound also informed it.

This may put a microscope on certain artists and songs, but it also pulls right back to get the whole panorama of rhythm and blues as it was informed by the church and the street, the sophisticated nightclub and boozy bar.

Essential music by any measure, in a box set which does it justice.

And best of all, it rocks like a mother.

G thanks for this heads up, I will have some of it already, but all in the same place will be brilliant. Will you review the new/old Exile and The National who I somehow missed over the last few years, but have caught their new one which i think is great. Almost a companion piece to new Band of Horses and i endorse your review
cheers 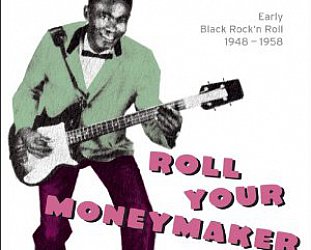 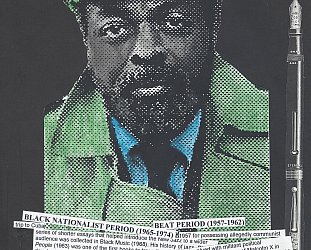