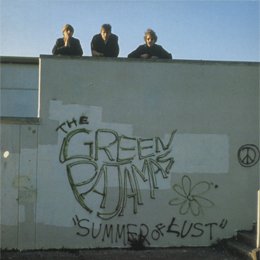 Green Pajamas out of Seattle are one of the great, if largely ignored, pysch-pop band (think Rubber Soul/Revolver) and at last they have got around to releasing . . . their debut album?

Re-releasing in fact (Summer of Lust appeared on cassette in '84 and on vinyl in '89), but here for most people are their debut recordings, first committed to reel-to-reel tape in bassist/singer Joe Ross' attic -- and they still sounds great.

There is a timeless, pop quality about Green Pajamas songs written by the gifted Jeff Kelly (interviewed here) and Ross, and the lo-fo quality of these 15 songs takes nothing away from their slightly Indo-tinged/Eight Miles High paisley pop-rock. In fact the wiry nature of their sound in these sessions actually enhances their impact.

Then a flexible three-piece (Karl Wilhelm or Joe Bauer on drums), Green Pajamas caught the ear of the Seattle underground, and Greg Shaw from Bomp Records . . . but when the whole grunge thing swept all before it GP were left waiting in the wings.

There wasn't the requisite angst, soft-loud or roar in their songs, just craftsmanship and subtle playing, and sometimes just pure pop innocence (Mike Brown here) alongside backwards guitars and dream pop with bite.

Great economic guitar playing, flat-tack raga-rock on the improvised seven-minute With a Flower in Her Hair, songs augmented by organ, melodica, mandolin, zither, banjo and so forth, and I Feel Like a Murder literally a field recording ("featuring Julie on waste basket").

The track Green Pajamas seems to have unwittingly anticipated the slacker pop of Beta Band. 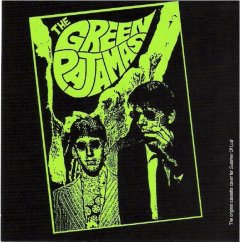 Their vast catalogue of some 20+ albums awaits your discovery, and these attic recordings just hint at the magic that was to come.

"I wanna dance with the angels, and tell me what's wrong with that," Kelly sings . . . and for my money they went on to do exactly that.

A little bit Lennon/Harrison, a little bit 13th Floor Elevators, some garageband psychedelica and memorable songs which are fresh but also vaguely familiar, this has yet to become a genuine underground classic but this reissue with a replica of the original cassette slip (above) and a background essay by Ross, slides effortlessly into repeat play.

There's a bonus track too: the seven-minute summer of love/lust Dreams Inside the Butterfly's Mind which sounds like it was conceived during an acid trip in late '67.

They also include an ad for the album. Have a listen.

Oh, and the back cover refers neatly to that of Rubber Soul.

Being an Elsewhere favourite, Green Pajamas have appeared a few time at Elsewhere and Jeff Kelly answered our Famous Elsewhere Questionnaire here. 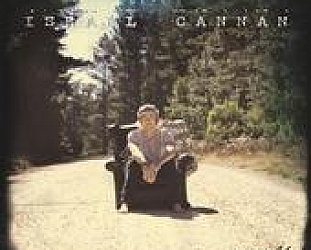 Cannan from the east coast of Australia has ben itinerant for some while -- hence the title of this album -- and has spent his time looking, writing and finally recording this quietly impressive... > Read more