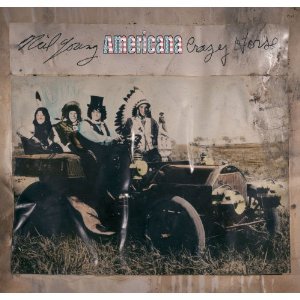 The thing about unpredictable Neil Young is just how predictable he has become, shuffling the deck of acoustic, country, self-referencing and noisy rock.

Here he again links up with Crazy Horse for the first time on record in almost a decade and they, predicably, deliver most things here with their loose, open rehearsal feel.

Behind the provocative title -- a swipe at the whole alt.country/roots/Americana scene perhaps? -- he offers rewritten or the unedited original versions of American classics such as Oh Susannah, Clementine (the important verse dropped from school hall versions here reinstated), Tom Dula (often known as Tom Dooley), Gallows Pole, This Land is Your Land (opening with the verse usually missed out) and so on.

Guests include Young's wife Pegi, Stephen Stills and a "choir".

On paper this sounds like an interesting idea but regrettably, with few exceptions, everything is delivered with the archetypal Crazy Horse neanderthal thunk which can be boozy fun but actually strips the album of nuance.

Into this context they also throw the doo-wop classic Get a Job which is so reductively stupid it is quite amusing, and would be great to have seen it when they got drunk at a wedding and tossed the hired band off the stage and did an impromptu jam. That's what it sounds like. But on album?

It's like that version of Farmer John on Ragged Glory. You listened and went, yeah you must have enjoyed knocking off that song you loved in high school. But . . .?

The final song is a take on God Save the Queen -- written in the 17th century and sung in pre-indepedence America -- which is rejigged to give it further American relevance. Can't imagine he'd be invited to sing it before a football game in Britain on the evidence of this shonky workout.

In the US, critics come over rather sweaty under the armpits about most Young albums these days -- the claims made for the leaden Living With War were extraordinary -- but this time even the early verdicts are ho-hum.

It's just another grinding Young and Crazy Horse album which travels their familiar furrow at the side of the highway. Many derided Young and Pearl Jam's Mirror Ball album, but it really shines in the comparison.

Unless you really, really liked Living with War, my guess is you won't play this twice, let alone look at its cover in a month's time.

As a forty plus year fan of the man, I stand well warned!

Hi Graham
I usually go along with you, but I really loved these retreads of primary school singalongs.
There you go...
cheers
Jeffrey