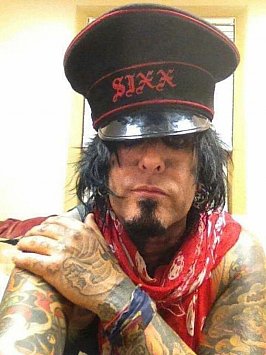 To tell truth, out of the many hundreds -- indeed thousands -- of musicians I have interviewed very few have been downright stupid.

Sure some fumbled for words, others said slightly silly things, and most just blathered on about The Album or whatever. But that's fine. We shouldn't ask anything of musicians other than they make great music.

I never thought Motley Crue did.

They made popular music, dishevelled music, primitive music in many ways -- but it never struck me as being driven by any great intelligence other than human rock-star need: to get drunk, high and laid.

So really it was no surprise to talk to Nikki Sixx in '91 and be struck by how gob-smackingly stupid he was. As I noted when I wrote it up, it wasn't a philosophy class.

A quick backgrounder, then I'm mostly gone. He's calling from LA because the band are winding up their notorious decade of decadence with a compilation called, yep, Decade of Decadence -- 12 re-mastered tracks, two newies and a cover of Anarchy in the UK.

Most of their 80s was spent under a blanket of white powders, getting tatts, in the company of less than chaste women and making the most primitive kind of rock. It was a great life . . . right up until it killed Nikki Sixx.

For four minutes in '87 Sixx was a genuine flatliner. Somebody had to spike a 10cm needle into him before Sixx was reborn.

And so was a hit single, Kickstart My Heart.

But by the time I got to talk to him he was working out (well, he said he was), singer Vince Neil had taken up golf and . . . you've got the picture. We’re no angels, Sixx says, but if we are, we have haloes of flies.

"Yeah, this album is, like the end of chapter one,” said Sixx, who has just returned from three weeks “diving naked into the sea" near Cannes in the south of France.

“We've exhausted that style and now we want to become more self-reflective. I write from the black side of my heart and am inspired by writers like William Burroughs, HP Lovecraft and Roald Dahl".

“The sex stuff? I’m kinda bored with it and prefer to write about other things like murder, rape, incest and grave-digging."

"Yeah, that’s more interesting to me. l‘d rather write about a junkie giving Aids to a prostitute than love."

“I like to add humour to something that's quite sick. We had a song that never made it on to anything which we did about six, seven months ago. lt’s called Hell on High Heels and one of the lines goes, ‘She's an HIV VIP.’ ”

Sixx tells a few more of the iines and then says people thought he was making fun of Aids.

“But man, someone's got to. Everything’s so serious.”

In the past Sixx has been known to proclaim himself publicly as a poet.

Maybe there are lines in Angelina, one of the two new songs on the album, which show this side of his talent?

“I‘ve been a poet, always tongue in cheek," begins one verse, “I’ve seen scenes man you’d never believe, and like a supercharged rocket ride, you know they’d have gasoline if they had the time . . ."

Uh-huh, let’s leave that one then.

But what about covering Anarchy in the UK, that spontaneous combustion of anger and nihilism from the late 70s?

“You know, we have so many different influences -- like blues, punk, speed metal and pop. I’ve felt there was a real similarity between early Motley Crue and that Sex Pistols, Damned and Clash period.

"I‘d be lying to you if I said I sit in a corner and shoot junk and spit on hookers. I don't do that any more -- but that is a place I used to be. I felt that attitude of anarchy was very similar.”

But that’s quite a different thing from what the song meant.

“It is, but on another level. There's always anarchy in music, it [the song] doesn’t represent 1977, but it is still true in sneer and grit for 1991. You, like me, remember that time -- fortunately we have fans that don't.”

The song Primal Scream on the album is more the direction they are moving in now. Sixx was very taken with the book of the same name by Dr Arthur Janov, the same therapy book which inspired John Lennon’s raw and personal John Lennon/Plastic Ono Band album back in 1970.

Sixx has obviously read the book a whole other way.

In part the lyrics go: "Hey man, get out of my face. I deal with problems at my own pace, with your screwed down anti-human views, deal with the pressure by playing the blues. If you want to live life on your own terms, you gotta be willing to crash and burn . . ."

It comes with a video, too, says Sixx enthusiastically. Lots of naked women.

“It's very groundbreaking, very primitive and with lots of nudity and shots of wild animals we filmed ourselves. Ozzy Osborne called me and said it was almost, like, satanic.”

And that was Nikki Sixx. A poet.