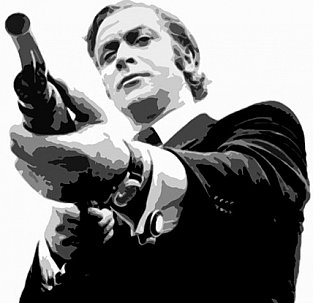 Get Carter (1971) is a British crime thriller, about gangsters, corruption and family loyalty, set against the grime of a declining Northern town.

The film marked the directorial debut for Mike Hodges and stars Michael Caine as Jack Carter, a London gangster, who returns to his hometown Newcastle, to violently avenge the death of his brother Frank. Poking around in the criminal murk, Carter incurs the ire of hard nut northern villains, and discovers the seedy degradations of Newcastle’s criminal underworld, has connections to his niece, Doreen.

The opening shot; Carter isolated in a death-like darkness, a stripped down, melancholic version of Roy Budd’s theme music, and the sound of the wind, (mirroring the final scene) foretells the character’s eventual fate.

Throughout the course of the film, further clues build, some ironically humorous, like the framing of a shot, of sign in a bingo hall, that reads ‘The Game is Final’. Carter may appear to be in control of his life; precise, fastidious, and professional, with his three-piece suit and briefcase, but he’s doomed, right from the beginning.

And at the heart of the film is a skewed morality; nobody, not even Carter, escapes retributive justice.

Caine appears in nearly every scene and makes an unsympathetic character compulsive viewing - a suave, swaggering, charming psychotic. An element of Carter’s likability also derives from his sardonic dialogue, and many his lines have become catch phrases for the film; for example; eyes like “Piss holes on the snow” and “You’re a big man, but you’re in bad shape.” 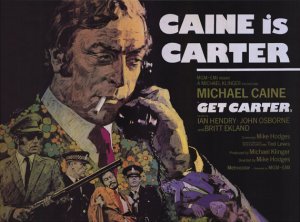 The at times humorous dialogue also alleviates the film’s bleakness.

Carter is also quiet, cold, emotionally detached (especially towards his female conquests), kills without remorse, and his sentimental sense of family loyalty is a little misplaced; a previous affair with Frank’s wife, may possibly have resulted in Carter’s fathering Doreen.

The character of Carter has interesting shades and contradictions of personality, and has become one of Caine’s defining roles.

The film depicts a festering world of criminal corruption that stretches from one end of England to the other; Carter’s London bosses have connections with Newcastle and its crime boss Kinnear, and Carter is warned against going up north, and “screwing up” business. Gang bosses are successful and prosperous, from their enterprises.

The film reflected a new breed of organized criminals, influenced by the rise of the Kray brothers, who brutally held sway over London’s crime scene during the Fifties and Sixties and achieved celebrity status with their ‘”legitimate” nightclub business.

Director Hodges began his career as a TV documentarian and he fills the margins of the film with details of northern working class life. Scenes were shot in real locations – pubs, a bingo hall, nightclub, betting shop and post office – and, similarly, the background extras were cast for their unvarnished naturalism.

The brief shots of washing hung across narrow, gravel backstreets and stair railings, nosey neighbours peering from behind tatty curtains, and back yard toilets all give the film a grimy authenticity – as do the grey skies, river and sea – and a depressing tone.

Newcastle had once been a prosperous town but was on the slide with the demise of heavy industries, particularly ship building and coal mining. Many of the film’s locations no longer exist, like the rows of dreary terraced houses where Frank lived, and the Trinity Square Car Park in Gateshead where Carter throws Brumby to his death.

Newcastle has changed considerably since the Seventies and the film captures a specific time in the town’s history. And the film’s details function as a backstory and explanation of Carter’s personality – a decaying, hard drinking town with few legitimate opportunities, which breeds an angry killer.

The film received mixed reviews when it was released; American critic Roger Ebert gave it one of its few favorable reviews singling out Caine and Hodges for fine work and wrote ; “Because Hodges has the stuff, Get Carter works as well as any British crime melodrama in a long time.”

However, many objected to the film’s (often implied) violence; “A revolting, bestial, horribly violent piece of cinema” the British newspaper The Evening Standard, wrote. 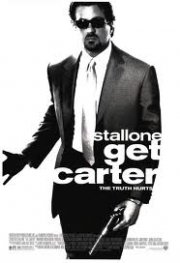 It was relegated to cult status for nearly 30 years, but a British re-release in '99 prompted a critical reevaluation and the film now ranks at 16 in the British Film Institute’s Top 100 British films of the Twentieth Century: “… Mike Hodges’ Get Carter is a tough and thoroughly compulsive crime thriller that delivers the gangland goods with great aplomb”.

An American version, set in Seattle, in 2000

directed by Stephen Kay and starring Sylvester Stallone, was poorly received and never released in England.

When so much of the original film was bound to its location and the era intrinsically rooted in the plot, it seems hard to imagine the American version.