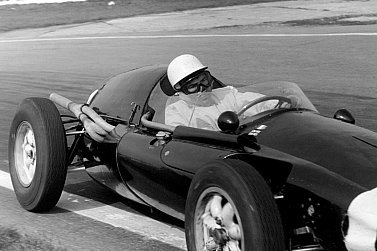 I’ll admit it right now, I’m a huge motor racing fan, but I can't stand Top Gear. Rare in this neck of the woods but . . . there you go.

This might make the task of watching a documentary hosted by TG's Richard Hammond a less than appealing prospect but I have good news, Hammond offers a candid and fascinating insight into the effects of brain injury, focussing on his own experience and that of interview subject Sir Stirling Moss OBE, both as a result of high speed crashes. Hammond Meets Moss (Prime, Sunday July 8, 9.45pm) is presented informally, like a cosy chat between old friends comparing war wounds, recognising in each others embarrassing memory loss incidents the same harrowing struggle to regain the life they once had.

It is interspersed with great archive footage of Moss racing and of course, in both cases, graphic footage and photos of the crashes. Hammond and Moss are lucky to be alive and are more than open about the aftermath of their brushes with death.

Stirling Moss was at the peak of his career when he crashed at Goodwood Circuit in 1962, leaving him in a coma for a month and with partial paralysis on his left side for six months. In 2006, Hammond was recording a segment for Top Gear driving a jet-powered car that crashed following a front tyre blowout at 288mph. Two days in a coma and many years of slow recovery followed.

Moss is a great watch, really stealing the show and – unbelievably -- he is a spritely 80 years of age. His voracious need to win at everything he competed in, instilled in him by his parents, was what made him so successful in his racing career and perhaps what ended it, as many believe he attempted to return to the track too soon.

Disappointed with a trial run he decided to retire, “If I can't win, I’m not going to make up the numbers.”

I wonder however if part of the reason he retired was to not tarnish the impressive career he had established. Either way, it must have been a heartbreaking decision. It also robbed us of one of the superstars of circuit racing.

You don't have to be a racefan or petrolhead to enjoy this simple and effortless interview.

I loved it when Hammond asks a question of Moss that he ponders and then replies, “I can't remember, it could be the brain injury or just simply old age.”

Its entertaining, and annoyingly, I will have to admit I like Richard Hammond – whose Hamster's Wheel production made Hammond Meets Moss as their debut doco – after watching it.

Greg Parsloe was born in Otahuhu, South Auckland during the Sixties and hasn't moved far from there. He has spent most of his working career in the print industry and has a love of typography. A handsome ampersand can make his day. Wants to meet Morrissey and tell him everything will be okay. Is counting down the days until the new speedway season starts Labour weekend. His website is www.gregobro.blogspot.co.nz/

He has previously contributed to Other Voices Other Rooms here.