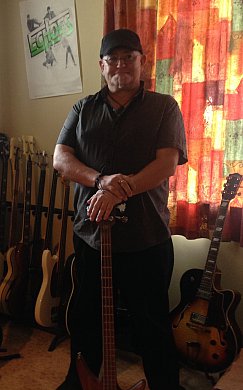 In the Eighties and Nineties there were two main camps of musicians in the Waikato. The “Originals” who wanted to only play their own material and who were happy to finance that dream through other means (ie day jobs); and the “Covers” who simply wanted to get out on stage and play, hopefully often enough to warrant giving up the day jobs and go “pro”.

Each side had its merits.

The “Originals” had more money and resources to spend on their songs but, especially being outside of Auckland and Wellington, gigged very seldom and then only to small crowds. There wasn’t an abundance of outlets for unknown bands and original music.

The “Covers” bands (of which I played in many) worked continuously.

Yes, it may have been other people’s songs, but we gigged three or for nights a week, close to 52 weeks a year. It developed our musicianship and taught us stagecraft. And I can still pack a trailer better than anyone I know.

I’m happy to have been one of the “Covers”. The money was barely enough to live on, but I got to play to a variety of audiences for many years, got to see a lot of New Zealand and meet some of the most brilliant and bizarre people you could ever hope to. 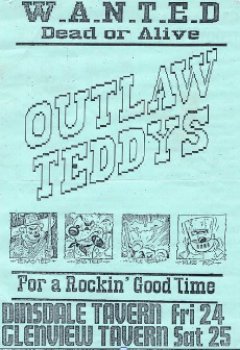 From socials and event gigs to pubs and clubs; the gang anniversary in a stone quarry, the small country pub starved for live entertainment . . . From stabbings in the public bar (as we were playing) to the clubs where we played encore after encore cause the punters didn’t want to go home. The good, the bad and sometimes, the downright ugly. I wouldn’t have traded a minute of it.

Some magic venues, most of which are long gone. Henry VIII in Whangarei with its Saturday Night Fever dance floor, The Lady Hamilton, (our unofficial home for several years), The Hilly, The Trees, The Cabana, The Leamington, The Nottingham Castle, The White Hart in New Plymouth (and the night the chicken heads attacked), The Bellblock, The Jolly Farmer, The Forge, The Cricketers Arms (Wellington), The Tamatea, Roxoff, Zaks . . .

The list goes on and on. Sex and drugs and rock'n'roll – definitely some of that, but also no money, long long hours and lots of miles.

But without the network of support for New Zealand talent that exists today, it was hard work trying to “make it” and many fell by the wayside. Let’s face it, there comes a time when squeezing yourself into a pair of imitation leather trousers to get up on stage and play April Sun in Cuba stops being fun.

So many of us ending up following the path of “normalcy” and drifted into the world of careers and responsibilities. I was happy at home, still with a couple of basses and a piano to jam along to the radio on the nights I couldn’t sleep. I’ve ended up with a great career in IT that still keeps me on the road working with clients throughout New Zealand and Australia. And the hotel rooms are lot nicer this time around (although the groupies are a lot fussier these days).

So there I was, happily traveling the IT road and having the odd “play” in between at friends' weddings or odd reunion gig. Missing the stage a little, but definitely not missing the bullshit and the lugging around of equipment that went with it.

But I do spend a lot of time in transit lounges, on planes, buses and the like. So a friend loaned me an iPad with Garage Band on it.

At first it was a bit of harmless fun, throwing sounds and patterns together. But then some of them started sounding pretty good. OK, I’m no Neil Finn or Dave Dobbyn but I’ve still got a reasonable ear and know when things fit.

I took these back to my (now) engineer/producer/business partner, Dean Carter and we transferred them to his Logic suite and start playing around with them. I set up my own Logic system so we could trade ideas between Hamilton and his base in Auckland and we called in a few old friends to help out.

Kim Earl (Prophecy) and Kevin Smith (Prophecy, The Bronx, Kix) on vocals, Ross McMillan (Russia, Outlaw Teddys) to help out with the drumming and Rik Bernards (Echoes, The Bronx, Knightshade) to add his guitar magic to a couple of tracks. 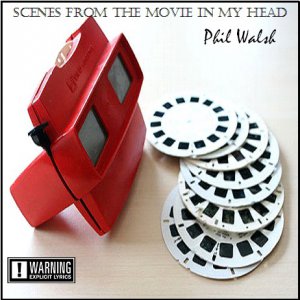 The rest is all me and I had to reacquaint myself with a few instruments and quickly learn a couple of new ones. Yes, that is me playing an electric mandolin in the background, but no, the horns are midi. So there’s live, sequenced and looped music all mixed in together. It all allows for the variety of sounds and feels I was aiming for.

Dean and I formed ‘doublebass productions’ to handle business side of things and from there grew my album Scenes From The Movie In My Head, 11 original songs telling stories that relate mostly to my life and travels so far (with a few imaginings thrown in for good measure.)

To finish it off we also recorded the very first original song I co-wrote back in the early Seventies, Morning Sunrise (which was also released as a single under the original band name of Prophecy).

Then we threw the whole thing at producer and engineer, Zed Brookes for mastering and he worked his magic to give us the final version.

Is it perfect? Nope, but it’s mine and I’m damn proud of it.

Phil Walsh is a sometime musician who previously wrote about getting the band Prophecy back together after 40 years to record their debut single. That story is here.

CDs of Scenes from the Movie in my Head are available from www.doublebass.co.nz You may also listen to and download it from iTunes here, Amplifier here and it is available for streaming at Spotify here.