Cassette tapes don't turn up in my letterbox that often these days. In fact not for at least a decade, maybe even much longer.

Remember the Seventies when the side of every highway was covered in ribbons of tapes throw out of car windows?

So it took a while to get around to putting this tape into the player (yes, I still have one, just below the turntable) and it wasn't until I looked again in the envelope and a hand-written letter which alerted me to something strange going on. It read: "Hello from Berlin, thought this might interest you. It is very obscure. An English woman called Margaret recorded in India in the 40s. Don't know much about her. Sam."

The curious thing is that I know no-one called Sam in Berlin . . . but clearly what was on the tape wasn't Whales for the Wizard by Malcolm Archibald and read by Robbie McNab as the label said.

This was music from Margaret who may or may not be the attractive woman on the cover, photographed –at a guess – some time in the late Thirties or Forties.

Such mysteries are appealing and so . . .

Here's the Margaret story as I understand it.

The woman in question was Margaret Anne Dorothy Elizabeth Uxbridge-Pendleton who was born into a wealthy British family in Jaipur, India in 1920 where her father was chairman of the London Import-Export Society, a cultural organisation which would send rare Indian artifacts back to British museums.

Even as a child she was attracted to dance and music, and despite her parents' best efforts to educate her at home in the classics (and presumably how to be a lady) she would frequently disappear off with the local Indian children to see traveling performers.

Out of frustration her parents sent her back to England for education when she was 14 where her story might have ended with a decent marriage and domesticity. Except a few years later she encountered some performers from Persia who were appearing at Burleigh House in Middlesex, the stately home of a friend whose father had travelled in the Levant and was much attracted to Middle Eastern exotica and Orientalism. It was here the 17-year old Margaret first clapped eyes on the dancer Farrokh Isman Bismillah Salamis (right), a Zoroastrian who possessed an animal magnetism, for which Margaret fell instantly.

It seems he was equally drawn to her and that night she persuaded her friend to lend her a not insubstantial amount of money and the young lovers fled, first to France, then Morocco and finally back to India. Along the way they became a highly proficient and much acclaimed theatrical and magic act, Margaret drawing on the Indian dances she had learned as a child. It is said that in Paris she enjoyed the company of Picasso and his circle, was perhaps one of Simone de Beauvoir's lovers and assisted Jean Genet to get his early work published. In Morocco she spent week in the desert, often by herself, communing with the vast emptiness. And sometimes in the company of Berber men.

However her volatile love affair with the equally faithless Farrokh survived their indiscretions, although by the time they arrived in Delhi in the early Forties – having fled the Nazis via Greece – they were almost destitute.

Little is known of what happened during the following five years other than Margaret – confiding in her long estranged younger sister Sarah through a series of as-yet unpublished letters – began immersing herself in Indian music, notably the chants and drones of a small cult known as the Kaili. 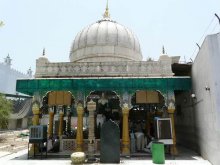 By chance one of the sound engineers for All India Radio had access to portable recording equipment and managed to capture just five pieces of music which feature Margaret's high vocals and piano recorded in the Yogmaya temple (right) in the Mehrauli district.

From the recordings it is clear that various Indian musicians are also present playing sarangi, violin, harmonium and providing the eerily ambient chant sound and some handclaps.

The old recordings have clearly been remastered at some point in the recent years but in the absence of any information with the cassette it is impossible to tell where or when that might have happened.

The beautiful delay in the spacious temple (and the occasional sound which might be a gong) add to these atmospheric pieces, but the mystery of Margaret remains. She is heard at one point in the second piece laughing.

This was music which stood beyond its cultural context and its period and has more in common with recent work by David Hykes and the Harmonic Choir, or even electronic music.

Tragically these were the only pieces of Margaret's music which have have survived.

And of Margaret herself?

Her story becomes even more sad. When the Partition of India happened in 1947 Farrokh was killed in the rioting which shook Delhi and the house Margaret was staying in was burned to the ground. She fled with few possessions – among them however the reel of tape of her music which she posted to her younger sister in Singapore. 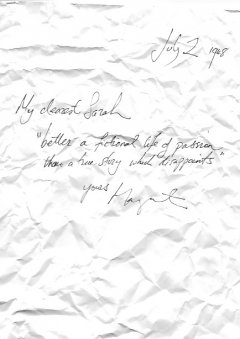 The letter accompanying it was dated July 2, 1948 and that was the last communication anyone had from her.

Before she was 30, history swallowed her up and all she left behind were a few photos, some rare music and a story of unbridled passion.

The cassette which turned up in my letterbox from some source unknown -- the "Sam" included no address -- included a photocopy of a spare note in Margaret's own hand.

It is all the more poignant for what it doesn't say: “Better a fictional life of passion, than a true story which disappoints”.

If you listen to this fascinating music and have read this life of passion, you'll know what Margaret meant.

You can hear Margaret's music here.

This has to be the most mysterious music with the oddest backstory at Elsewhere since this album, The Voyage of the Corvus Corrone. Check that out. You will be amazed.

She didn't die, she changed here name and helped open the The National Theatre of Iceland in 1950.

There is an article in the 1953 United Nations Triennial Report on Unrecorded Ethnomusicology about the chants and songs of the Kaili and it was written by an Anne Pendleton. Coincidence? I think not.

My guess, it's someone from An Emerald City trying to make up an interesting back story for a new project. GRAHAM REPLIES: An odd observation. Tell us more please.

I'm sure I read it was a theater in Finland and Margaret (she kept her first name but changed her last) set up a Finlandia India Bicultural Society or something along those lines.

Who doesn't love a good mystery? And when it comes wrapped up with unique music the puzzle becomes even more alluring. For the dissolute Monday afternoon net voyager my personal favourite begins here:
http://www.squirrelthing.com/artists/connie-converse

I thought that The Voyage of the Corvus Corrone (which I foolishly bought as the lp) was rubbish so am not inclined to invest time and energy in this manufactured mystery - sorry! Look forward to learning the truth when the mucking about is over.
But keep the dispatches coming!

The plot thickens upon visiting Bandcamp to experience more of Margaret. It would seem that Dr Parnassus must have been visiting the Yogmaya temple in the Mehrauli district, and with his wondrous Imaginarium. Because , not only were these recordings made in an old church (The said Yogamaya temple perhaps?) but also in a fifth generation piano shop (I did hear a vague hint of piano there ... could well have been a 5th generation one), but also an abandoned coin factory. Methinks this is freshly minted Margaret ~ and that perhaps our mystery Sam is indeed the notorious myth-maker Sam Handley, as hinted at previously ....

THE MYSTERY REVEALED . . . Okay, we've had enough of this game so here is the true story: Some weeks back Sam Handley (formerly of Auckland band An Emerald City) contacted me from Berlin saying he had recorded some different and interesting music he thought I might be interested in for Elsewhere. He'd done it under the name of "Margaret" and suggested making up a story about her. He sent me a cassette of the music (true, a tape!) and the idea that she had a lover Farrokh (Freddie Mercury's real name). The photo was from the tape cover. I took it from there. I made the whole story up but dropped clues if you do acronyms on her father's company (LIES), her name (MADE UP) and his name (FIBS). There was also a clue to the fiction in her "letter" at the end, and also the link to another similar fiction in which I participated in a similar manner. And anyone who knows the Beatles' film Help! would have got the "Kaili" reference. I was also Stefan in the comments (another acronym/clue for you all) and I enjoyed Sybil's acronym in the comments too. She got it. So did Keith. Just a bit of fun in a too serious world. And I genuinely like Sam's music.

Well done all concerned, an entertaining diversion - always did enjoy An Emerald City's work too.