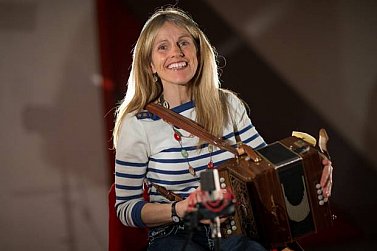 For many decades now Sharon Shannon and her band have been in the vanguard of broadening the parameters of traditional Irish music into something a kin to folk-rock and bridges to reggae and country.

She mostly plays accordion but is also respected as a fiddle player and over the years has worked with artists as diverse Dennis Bovell, Elvis Costello, Nigel Kennedy, Kate Bush, Steve Earle and many others . . . as well as the roll-call of great Irish artists such as Sinead O'Connor, Donal Lunny, Christy Moore and Kirsty MacColl.

With over a dozen albums to her credit and a formidable live reputation she and her band will be one of the most enjoyable acts on the bill at the 2019 Womad in Taranaki (details below).

So obviously it was time to ask her some questions . . .

I started playing the tin whistle when I was 8 years old and I used to play regularly on stage with other musicians and sound system for ceili dances every weekend.

I think I would probably have ended up working with animals in some way or another..I also love sewing and altering my clothes and shoes, so I would like to have worked somehow in the area of fashion design or at least some sort of a career working with a sewing machine and drawing out ideas.

I was also very hooked on the notion of becoming a top hair dresser when I was a kid.

1. Saints and Angels by Mike Scott

3. Angel Flying Too Close to the Ground by Willie Nelson

Also I played recently in a vegetable glass tunnel at a mini festival in an amazing community garden in Lahinch Co.Clare which feeds over 90 local families. Amazing atmosphere with all the garden volunteers and locals socialising and dancing around wildly in their wellies and working boots.

The Sustainability Secret. This book is the companion to the documentary 'Cowspiracy'. It explores the impacts of the most environmentally destructive industry on the planet: ANIMAL AGRICULTURE.

Philip Wollen... An Australian philanthropist who passionately defends animals and has made some very famous and hugely inspiring speeches about animal rights.

'Cowspiracy' ... a movie with which details the link between animal agriculture and ecological crises such as climate change, ocean dead zones, and water shortages.

' Dare to Be Wild' tells the fascinating and inspiring true story of Irish woman Mary Reynolds, who became the youngest recipient of the Chelsea Flower Show Gold Medal in 2002 for her garden, designed to bring back the beauty of wild nature to the sterile and unnatural design of urban and private gardens.

She was daring and brave in the fact that she presented a wild garden including weeds and rabbit droppings.

'Forks over Knives' ...a fantastic movie that promotes the benefits of a whole-food, plant-based diet

My rescued animals at home. My family and my friends and the music sessions at parties.

A huge top-quality vegan feast with a huge variety of food including starters and a wide variety of ice cream and desserts that hopefully would be so good that the meat eaters would consider veggie options more often when they are shopping in the supermarket or that they would be inspired to try the veggie options in a restaurant.

No, not every day. Often, I don't have time to play at all. But when I do take out an instrument, 3 or 4 hours can often slip by very easily. I do most of the writing of melodies while I'm out walking my dogs or driving the car. The tunes just race around inside in my head and I just sing them to my phone using the recording app

Do lots of parachute jumps, paragliding, helicopter rides and other dare-devil type exciting things with friends and family. Take my family on sunny holidays. Skiing holidays.

De-clutter my house for once and for all.

I need to get up off my ass and set some goals. I don't have any at the moment which isn't really a great thing. 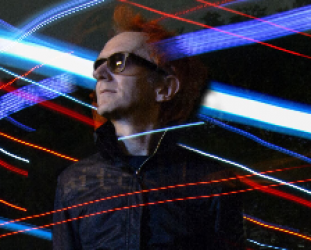