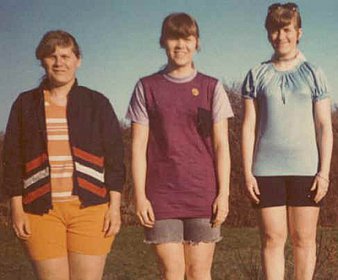 When Don Emerson realised his sons Donnie and Joe had musical ambitions he was enormously supportive. He bought them instruments and then, on the family farm in Washington state, built them a studio and started on a venue (with a backstage area) for them.

Although the Emerson's sole album Dreamin' Wild in '79 didn't sell, disappeared and became a cult item until recently (that story and music is here), the boys clearly had some talent.

Unlike the Shaggs in the late Sixties -- sisters Dot (vocals/guitar), Betty (vocals/guitars) and Helen(drums) -- whose father Austin had similar unshakeable belief in his girls who were, unfortunately, musically tone deaf.

"His big dream was to make the records, have us be popular and eventually go on tour," said Dot in '98.

Unfortunately for the Shaggs, musical ability was something that inhabited a far corner of the planet -- as evidenced on their sole album Philosophy of the World which their dad helmed into life by pulling the girls from school, buying them instruments and getting them music lessons. The latter course of action conspicuously failed. 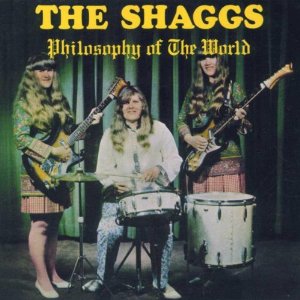 Philosophy of the World is certainly something to hear of course, even if it is more of an endurance test than an enjoyable experience. That said, it has had support from many quarters although the positive reaction is rather perverse.

Rolling Stone's Alt-Rock-A-Rama in '96 ranked it among the 100 most influential alternative releases of all time, the greatest garage recordings of the 20th century and the 50 most significant indie records.

Hard to see how that influence can be justified when only 1000 copies of the album were pressed, almost all disappeared (into a garbage bin is the most plausible suggestion) and very few people at all heard it. Among those who did however was Frank Zappa who hailed it as one of his all-time favourite records: "Beyond Captain Beefheart."

Okay it is, as Irwin Chusid -- author of Songs in the Key of E; The Curious Universe of the Outsider Mind -- says, "100 percent authentic and refreshingly guileless", but it can hardly be claimed to have been the template for the whole alt.rock movement of similarly conceived outsider msuic.

The difference is that the Shaggs' models were pop groups like Herman' Hermits, Dino Desi and Billy and the Monkees.

These girls were actually trying to be a good pop band, not avant-garde or nodding in the direction of free jazz as some have suggested. They wanted hits (listen to their typically teen angst lyrics), it was just that they couldn't play.

So when Terry Adams, keyboard player with NRBQ who reissued Philosophy of the World in '80 says the music "has its own structure, its own inner logic" and he compares them with Ornette Coleman you have to think he's either deluded or shoveling the shit.

These sisters simply had no talent and the guys at the recording studio knew it.

"We shut the control room doors and rolled on the floor laughing. Just rolled," Bobby Herne of Fleetwood Studios told Chusid. "It was horrible. They did not know what they were doing, but they thought it was okay.

After the record tanked, father Austin got the girls to do another session for a follow-up but that never appeared, then Austin died and the band broke up.

Then the cult following started and the original album has been reissued a couple of times, sometimes with the songs from the later session added.

The girls play as three independent musicians sometimes connecting and at others just going their own way. Just weird. Bonnie Raitt described them as castaways on their own little island, and jazz composer Carla Bley said "they bring my mind to a complete halt".

The liner notes on the original album however ring with truth.

"The Shaggs are real, pure, unaffected by outside influences. Their music is different, it is theirs alone . . . you may love their music or you may not, but whatever you feel, at last you know you can listen to artists who are real. They will not change their music or style to meet the whims of a frustrated world."

lord help me, it's kind of mesmerising