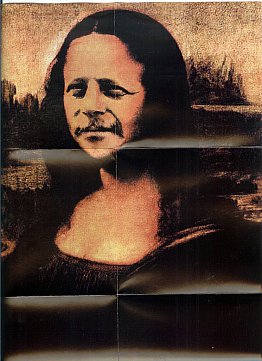 Given Frank Zappa's proclivity towards oddball performers and different musicians -- Captain Beefheart, the GTOs, the Shaggs -- it's hardly surprising he should be the one who brought Wild Man Fischer into the vocabulary of outsider musicians.

And Fischer was very outside.

In '68 Zappa recorded a double album of Fischer's singing and rants as An Evening with Wild Man Fischer, the title suggesting a lounge act or comedy performance.

Needless to say, it was neither. 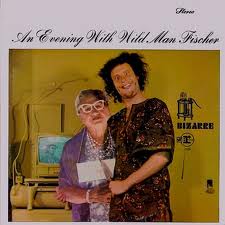 Some of it was recorded on the street where he would bellow out his original songs "for a dime", usually his whooping Merry Go Round, some spoken word rants ("I'm Not Shy Anymore"), recorded conversations, and some studio recordings where he wanders off-mike, guest spots from Kim Fowley and Rodney Bingenheimer as quasi-Beat cheerleaders for Fischer . . .

It's less an album than collision of indulgence, insanity, yuck-yuck humour and mad songs from a man of modest talent (if any) but an unshakeable need to sing and shout.

Curiously enough, Zappa wasn't the first to stumble across the peculiar talents of Fischer who had previously been incarcerated in a mental hospital as a teenager -- twice, diagnosed as a paranoid schizophrenia. Solomon Burke -- who gave him the name "Wild Man" took him on a tour after seeing him at a talent show, and Fischer had tried to interest Phil Spector in producing him. 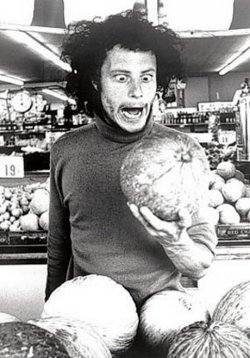 In him, Zappa probably heard a kindred spirit -- the freak aspect -- and Fischer toured with Zappa and the Mothers.

You have to admire his willingness to sing whatever came into his head with no discernible thought to melody, although it is clear from hs wordless interpolations he probably heard some kind of arrangement in his head.

He fell out with Zappa over money but, although times got tough, he just kept doing whatever it was he did and as his profile fell his cult status went up.

There were other recordings (The Fischer King) but his mental illness was always going to ensure times would be tough for the Wild Man.

This rare, untutored, odd but hardly unique singer spent the last seven years of his life on daily medication in a state-assisted home. He died in 2011 aged 66.

Wild Man Fischer was certainly an unusual character and his music has a naive, enjoyable and slightly disturbing quality. At times -- Start Life Over Again, The Mope -- you can almost hear a pop song emerging.

I used to have the double lp but no longer. Shame it doesn't seem to be available anymore in any format. Maybe the Zappa reissues will eventually encompass other material he issued, such as this. I'm never going to forget 'Merry Go Round'!

I imagine that what Zappa saw in Fischer was something subversive and provocative to mainstream American life in the '60s, together with the same kind of "parallel universe" represented by Beefheart or other FZ favourites like The Shaggs. One thing: it may have been reported somewhere that Fischer fell out with Zappa over money, but it's well documented that he was banned from having any connection to the Zappa family after he went psycho in their house. Personally, I love Fischer's stuff: put it up there with Florence Foster Jenkins and Wing. So wrong that it makes you wonder how people ever get it right. I'd rather listen to this than any number of musicians who can hit a note but don't have an original idea. GRAHAM REPLIES: I would definitely bow to Gary's superior knowledge in this matter of money/mayhem. It's not hard to imagine Wild Man going psycho. Sort of was anyway.