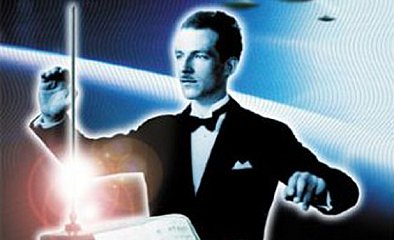 You gotta hand it to inventor Leon Theremin, no one else had thought of a stringless cello. And if that sounds a bit Dada or like an installation at a Yoko Ono art exhibition, be assured. It was the real thing.

Theremin invented an electronic stringless cello for the British conductor Leopold Stokowski. He also developed an early form of television which his homeland, Russia, adopted enthusiastically. Not for anything so base as entertainment, but as a surveillance device.

And you'd have thought – because he also invented an electronic burglar alarm which Lenin was so impressed by he had installed at the Soviet State Bank – he would be something of a Soviet hero. Sometimes he was, sometimes he wasn't.

As was so easy to do, he fell foul of the Soviet authorities and when he adopted and enjoyed the hedonistic ways of the West while in the States during the Thirties, it was alleged by his wife (the black ballet dancer Lavina Williams) that he had been kidnapped from New York. It was true he was dumped in a Siberian gulag for eight years where he was forced to work on military technology, but it seems in fact he'd done a flit from the US because of tax and income problems.

Quite how he specifically fell from grace and offended the Soviets and ended up in the camp was never clear.

His most well known invention is, of course, that which bears his name: the electronic sound machine which used electromagnetic fields. Wave your hand around the aerial and ring and you get weird sounds . . . and because you never actually touch the thing it is if the performer is conjuring sounds out of the air.

Which is essentially what the theremin – as heard on the Beach Boys' Good Vibrations and Led Zeppelin's Whole Lotta Love – does.

Leon Theremin – born in St Petersburg in 1896 – first demonstrated his marvelous and magical machine in 1920 and within the decade it had become widely popular for the sheer wonder of it. Theremin played it for Lenin, then took it to Europe and the United States where gained a US patent. The craze didn't last although Theremin tutored younger players and continued to invent other equally improbably electronic instruments.

“It's an instrument of feeling. You play it by emotions,” said Theremin, “not by means of studied rote.”

Because its damnably hard to control the pitch there have been few expert practitioners, although the Russian Clara Rockmore – who met Leon in 1928 – became its leading practitioner and by just the slightest hand movement could achieve exceptional effects and is considered the instrument's virtuoso performer. Often she makes it sound like a soprano voice.

In 1929, after a performance the Boston Post reported, “A young woman waved her hands in the air – and 10,000 men and women who thronged the Boston Garden last night were held motionless and speechless, glued to the spot”.

The report said the theremin had “untold possibilities” and “in a decade from now the child will be talking about taking theremin lessons”.

That didn't happen but Robert Moog – himself no slouch in the world of electronics, witness the Moog Synthesizer – manufactured several models of theremins during the Fifties and considered Leon's instrument one of the most significant developments in the history of electronic sound.

To disconcerting effect, it's exotic properties were exploited by Sam Hoffman who used its sound in Hitchcock's Spellbound (the one with the weird dream sequence designed by Salvador Dali) and the scary booze-addict film The Lost Weekend. Hoffman also recorded a series of albums using it alongside Billy May's orchestral arrangements.

But what of its inventor?

After time at the state's pleasure he continued to work for the KGB (he was awarded the Stalin Prize for espionage), joined the Moscow Conservatory where he developed other electronic instruments but then, in a typically bizarre twist, an article in the New York Times proclaiming his genius meant he again fell from favour back home. All his instruments were destroyed and, in his 70s, Theremin had to start all over again.

He also taught his young grand-niece Lydia Kavina how to play and she became the equal of Rockmore, and Theremin traveled to Europe and the US again promoting his work.

By the time he died in '93 his instrument had been, if not widely known and adopted, heard by millions courtesy of the Beach Boys and Led Zeppelin. And more recently by Stereolab, Portishead, the Jon Spencer Blues Explosion, Mercury Rev . . .

Towards the end of his life Theremin worked on a version of his famous instrument which could be controlled by . . . eye movement.

Great little play at the Basement last year about him.