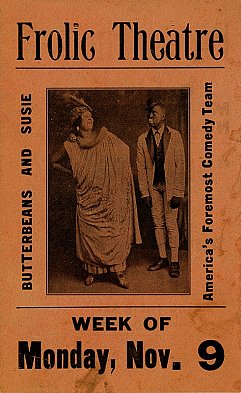 These days we are used to artists taking a few years between albums – although some were surprised Blue Nile took seven years between Hats and Peace at Last.

But for the Vaudeville comedy/song-and-dance duo of Butterbeans and Susie it was a full 30 years between their last songs for Okeh in 1930 (You Dirty Mean Mistreater among them) until their return to the studio in 1960.

And even when they had their second life as recording artists it was just to re-visit some of their more popular (and less salacious) songs along with a few Vaudeville standards.

Within a few years of those sessions Susie Edwards died and her husband Jody (Butterbeans) followed her four years later (dying as he walked on stage by most accounts).

Their deaths coincided with a rapidly changing world (the rise of Martin Luther King to the more radical Black Panther movement) when acts like theirs were being widely disparaged as presenting black stereotypes: the bickering couple, slapstick and silly costumes, apolitical jokes and sexual innuendo, Butterbeans' bug-eyed heebie-jeebies dance routine . . .

That they were part of a long tradition didn't seem to matter. They just looked dated and lines which said “if your wife is unruly give her a mouth full of fist” on A Married Man's a Fool -- where he reads from the "Good Book" about infidelity -- are uncomfortable at best.

By the time of those 10 songs in '60 they were an act from the grandparents' past when the humour was broad and jazz-blues was the dominant idiom. 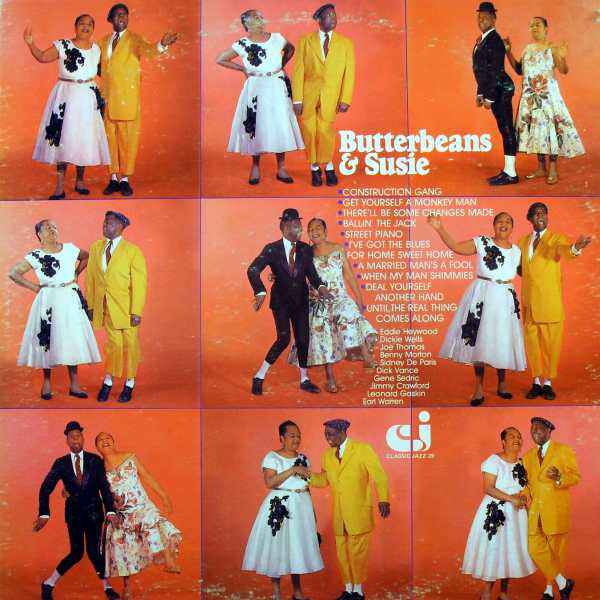 But theirs is a story worth telling because despite being away from recording for three decades they still always had a live following and in the year of that final recording they appeared at the Apollo Theatre on a bill which included emerging Motown acts.

They both grew up on the stage as part of dancing troupes and Jody (Butterbeans) Edwards from Georgia and Susie Hawthorne (from Florida) met and were married on stage in 1916 (for $50 apparently).

The following year saw the death of the popular pianist/singer and comedian Budd LeMay – known as Stringbean (not this Stringbean) – who they'd opened for.

Stringbean performed with his wife Sweetie May (Sweetie Matthews) but when she went solo and he died in strange circumstances the promoters saw an opportunity: and so Butterbeans and Susie took over from Stringbean and Sweetie.

They were immediately popular because of the faux-bickering between the married couple, her somewhat haughty and superior demeanor as opposed to his clownish appearance and rages, her sexy blues songs (I Want a Hot Dog for My Roll was typical of the “dirty blues” of the time, not revisited in the '60 sessions) and his dance moves.

And when they recorded they were accompanied on three early tunes by King Oliver, a few with Louis Armstrong's Hot Five (He Likes It Slow in '26) and longtime pianist/composer Clarence Williams who had accompanied Bessie Smith and others.

Williams was the A&R man at Okeh Records and the couple were brought to his attention by the singer Sarah Martin. Butterbeans and Susie recorded more than 60 sides for the label between '24 and '30. (These were collected across two CDs by Document Records out of Austria in '97)

It may be that when Williams moved more into a production role at Okeh that the couple lost their connection there – the Depression didn't help either because sales of records plummeted -- but they continued to be a very successful live act on the Theatre Owners' Booking Association (TOBA) circuit. (Also know as Tough on Black Asses by the performers). 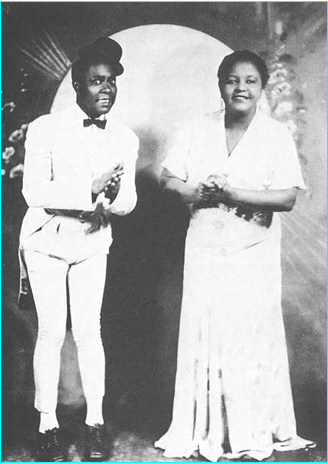 Put aside the dirty blues from their first Okeh incarnation if you feel you need to  (some of which is very funny in its innuendos) and accepting that at this distance we can't see their act, there are plenty of reasons for listening to their original and final recordings.

Susie was a highly accomplished and sensitive blues-ballad singer (I've Got the Blues For Home Sweet Home on their '60 recording), Butterbeans obviously learned thing or two from Armstrong's singing style, and on the '60 recording – which can be found online but not on Spotify – the band is excellent, although not as raw as on the original sessions.

A few of their earliest Okeh songs appear on various compilations, on Spotify you can find the innuendo-heavy Elevator Papa Switchboard Mama on Risque Blues Vol 4. and Papa Ain't No Santa Claus (Mama Ain't No Christmas Tree) on Screening the Blues here.

Tain't None o' Your Business which is a talking piece appears on The Roots of Rap, but it's a stretch to hear them in that lineage.

Those Austrian compilations can be found through amazon.com as can their track with Louis.

So they are out there for those willing to search.

Butterbeans and Susie were a Vaudeville comedy, song'n'dance and hokum blues (dirty blues) act which by definition means they are far removed from us almost a century later.

It was a different world back then . . . and one in which they were very popular on the black touring circuit.

And that's why we should remember – and need to talk about – them.