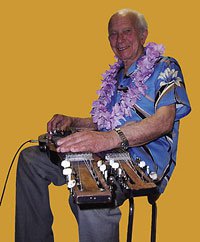 Bill Sevesi says he speaks three languages, but he actually speaks four. The three he will admit to are Tongan (he was born in Nuku'alofa almost 88 years ago), English which he learned when he came to Auckland at age 9, and Italian, picked up during World War II.

"I found out that making love to Italian girls was better than fighting Germans," he says with a wicked glint in his eye, "so I learned the language. I was only 21, and the next day you didn't know if you were going to be alive. So have a good time."

But he says war sickened him, and when he came home he burned his uniform and everything but his pay book.

"They sent me some ribbon, some star or whatever, and I threw it in the rubbish."

And back home it was a year before he picked up what he had been doing previously in civilian life, playing Hawaiian and Pacific music on steel guitar.

And that's the fourth language Sevesi speaks: the musical history of Auckland.

He may have opening for the Finn Brothers a decade ago -- and played with Neil Finn and Dave Dobbyn -- but he can also tick off the names of great Auckland band leaders of the Thirties and Forties, such as Epi Shalfoon, whom he considers a crucial influence on his 60-year career playing and producing Pacific music with his bands which were renowned for their constantly changing lineups.

As a boy Sevesi -- real name Jeffs, but he long ago adopted the Tongan version -- tuned his crystal set to the then-popular Hawaiian guitar sounds of Sol Hoopi and others flooding the airwaves from American radio networks.

His first job was in a radio factory where he and his workmates built an amplifier and steel guitar for him.

He learned rudimentary melodies and chords off the radio, and when he could afford it bought 78rpm records for his wind-up gramophone.

"Oh, that's a sad story. A girl got up and walked away from me one time because I was winding the gramophone all bloody night. She wanted to play and I was so busy winding. I threw it away after that.

"I started to learn to read music but I was getting mechanical and doing what the music was saying, but Polynesian music doesn't go that way."

And so this intuitive musician absorbed it wherever he could, and quite literally at the feet of Epi Shalfoon in the late Thirties.

"I asked around who the best band leader was and everyone said him. He was then playing at the Crystal Palace in Mt Eden. Why was he the best?

"Personality goes a long way, just like with politicians. You have to have an image and it's not just the music, because people see you as well as hear you. Epi played saxophone and walked around the floor and was an entertainer, too."

Sevesi watched the band week after week, and eventually Shalfoon asked him if he was a musician. He said he was learning, could really play only one song - Isa Lei - and Shalfoon invited him up. That was the turning point.

"I was so encouraged by that, and that's one of the reasons why today I try to encourage other people."

Sevesi was also a pragmatist: "I knew if you played in the dancehall they paid you and you could eat. And we all have to eat."

His first band was just starting to find an audience when Sevesi went to Italy in '44.

On his return he picked up where he left off, Bill Sevesi and his Islanders becoming increasingly popular at dances in those days before television, perhaps because of the revolving door lineup which meant he introduced newer and better musicians.

"I learned for every good musician on stage there are 10 more outside waiting for the opportunity.

"So if someone was not feeling well, playing up, getting drunk or was always late I would say, 'That's enough, you're out."'

His first recording was with country singer Tex Morton in 1949 with the band credited as The Rough Riders.

Sevesi and his Islanders recorded under numerous pseudonyms: with Canadian-born hillbilly singer Luke Simmons they were the Bluemountain Boys; for jazz singer Mavis Rivers "the Astro Trio or some damn thing"; and on one of their biggest hits for Phil Warren's label in 1959, Bye Bye Baby Goodbye, he was Will Jess, an abstraction of his birth name. The song was No 1 for four weeks, and had been recorded in half an hour of studio downtime. 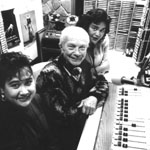 By then Bill Sevesi and His Islanders were an Auckland institution and would remain so until the mid-Seventies.

In 1954, because of their popularity, they had been invited to play two nights a week at the Orange Hall in Khyber Pass (Sevesi later renamed it the Orange Ballroom because it sounded better) for twice what they were earning elsewhere.

He admits he earned "a phenomenal amount of money" at the time, and the place, which legally held 499, was invariably packed.

"The crowd automatically started coming up. I was using Epi Shalfoon's method. If people have had a feed and a few drinks they don't want to jump and dance straight away. So I would play quietly and watch their feet, and when they started tapping their feet we knew we were on the right track."

For those unfamiliar with the period, it is hard to imagine the social climate. People would get dressed up to go to the pictures; restaurants couldn't serve alcohol; pubs closed at 6pm; and most people didn't have television. So people went to dances.

"One night for a midnight dance we had 1702 people inside and others dancing in the streets outside."

Sevesi says the change of the liquor laws killed the Orange Ballroom. It was the centre of a triangle of pubs - The Edinburgh Castle, The Astor and Kings Arms - and the only taxi rank around was right outside. There were late-night fights, bottles smashed and the Ballroom was blamed.

"Inside we were playing this beautiful Hawaiian music, but I could see the way it was going, so we quit. In June 1973 I left, the band carried on, but I wasn't used to playing to empty halls and we were down to 300 to 400 a night.

"The RSAs and football teams had their own social clubs, and bands played in the hotels and pubs so people weren't going to the Orange Ballroom. So that was it."

Although that was far from it: Sevesi had long been recording, and free of the constraints of live work, he could indulge his passion.

Behind his Mt Albert home is a small garage and an even smaller rehearsal studio stacked with tapes, guitar strings, recording equipment, CDs and files. There is a claustrophobically tiny vocal room half the size of a telephone booth.

It was in this modest workspace that Sevesi refined his style on his ragged-looking handmade steel guitar, taught singers and instrumentalists how to improve their art, and made demos and rehearsal tapes.

He has a sleepout there, too. "When you are tired you sleep and when you are hungry you eat. I don't go by the clock."

It's a philosophy that has ensured longevity and a productive life. Sevesi isn't sure how many albums he's made - at least 50 - and his most recent, Our Serenade, credited to the Bill Sevesi Team, typically showcases new talent and unacknowledged singers such as Tommy Stowers and Kathy Reti.

His work is universally admired, he has friends all over the globe, has given 200 songs to the university archives, and been much honoured: the Queen's Service Medal for public service in '95; the Creative New Zealand Pacific Island award ('97); and four years ago America's Gerry Byrd Lifetime Achievement award for his contribution to steel guitar. His name is in the steel guitar hall of fame in St Louis, Missouri.

But Sevesi is too busy to think about such things. He has another album already finished, he's just back from Christchurch's steel guitar convention; and he's playing the Finns' hooley after earlier playing at Neil and Sharon's wedding anniversary.

"He'd contracted me through an entertainment agency. I didn't know who it was until a week before. If I'd known it was him I would have charged more. But it was a wonderful night.

"We played on the lawn, the moon was full, there was warm air and this beautiful Hawaiian music playing softly while all his guests arrived. The stage was set right and the neighbours came out and listened."

He proudly shows a picture of himself with Sam Neill "who said, 'I'm a fan of yours, can I have a photo taken with you?' Just wonderful."

For the Finns' hooley he opened the show with four numbers.

"Neil suggested four but two I didn't like so I said I'd get some better ones, and I'm playing one other with him and two with Dave Dobbyn.

"Some of [Neil's] songs are bloody nice. He wanted me to do two but there was one I didn't like. It's pop music and I don't play pop music.

"That's for young people," says the man who has a twinkle in his eye, a rapid irreverent wit and a love of life that would shame those half -- no, a quarter -- his age.

Interested in this? Then you should check out this. 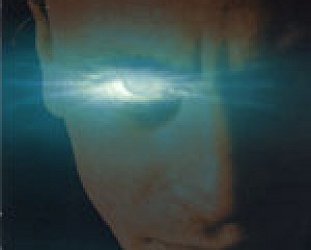