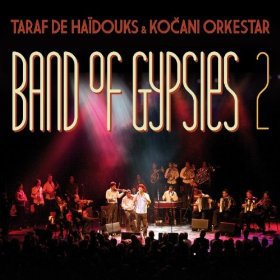 The rather mouthful of an album title tells you that this is forced marriage of two Romany groups teaming up to celebrate the Taraf's 20th anniversary.

This album comes a decade on from the first Taraf Band of Gypsies album (which had the Orkestar playing on three pieces) and with both bands by sharing a Belgian musical director Stephane Karo they are here on equal footing and share Turkish influences.

Here the 26-piece ensemble play new material which explores the contrast between the horn-driven Macedonian Orkestar and the Romanian Taraf's violins and accordions.

This has a real sonic impact but also dips into emotional territory when Taraf singer Paul Giuclea -- who has an astonishingly powerful voice -- steps up for the exceptional Mandrulita Mea.

Sara is a lovely ballad, and when both groups land on Talk to Me Duso – emotional violins, strident horns – this is joyous.

There's an urgency and intensity here – the exciting Turceasca a lu Kalo and the percussion and horn-driven Jarretelle, and the foot-stomping Gypsy Sahara – but the emotional ballads are the ones which leave a lasting impression when the dancing stops.